Do You Believe This Ridiculous Excuse Bowe Bergdahl Cames Up With For His Desertion?

The investigation of Bowe Bergdahl’s disappearance and capture in Afghanistan six years continues. In a packed courtroom, yet another elaborate story is being told to try and prove his innocence…AND SURPRISE, SURPRISE…now they are saying it’s not his fault he left his post…nope…now IT’S HIS PLATOON’S![1] 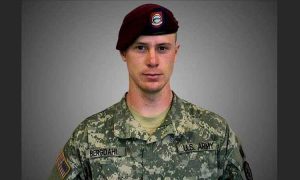 The officer who led the investigation of Bowe Bergdahl’s disappearance and capture in Afghanistan six years ago testified Friday that the Army sergeant said he walked away from his post as part of a plan to spark a search and get the attention of a general so he could express his concerns about his unit’s leadership.

Maj. Gen. Kenneth Dahl told a packed courtroom at Fort Sam Houston in San Antonio that Bergdahl felt the problems were so severe that they put his platoon in danger, but that Bergdahl’s perceptions were “completely off the mark.”

Dahl said Bergdahl had an elaborate plan to head from his post to the forward operating base roughly 19 miles away, expecting to arrive while a search was underway and to create a “PR event” that might get a general to listen to him.

“He felt it was his duty to intervene,” said Dahl, who described Bergdahl as having few friends but who seemed motivated to help others. He said he doesn’t think Bergdahl should go to prison.

Bergdahl was captured by the Taliban after leaving his post on June 30, 2009, and held until last year, when he was exchanged for five Taliban commanders being held at the U.S. detention center at Guantanamo Bay, Cuba. His commanding officers in Afghanistan testified Thursday about the grueling 45-day search for Bergdahl, saying it put other soldiers in danger.

Military prosecutors charged Bergdahl in March with desertion and misbehavior before the enemy. His Article 32 hearing, which was concluded Friday, will help determine if he should face a court-martial.

So, Bergdahl is innocent, and his platoon is guilty…that’s what his story is!!? Guilty of what? Existing? A scumbag move we are seeing too often in Obama’s America. It’s not the criminal’s fault, it’s the victim’s. Shifting the guilt to the innocent…oldest communist trick in the book.