Mama Sarah, the President’s Grandmother[1], has promised to cook a traditional meal for Obama when he visits Kenya, where a lot of his paternal relatives live. This could include any number of things, including but not limited to fish, chicken and… dog? 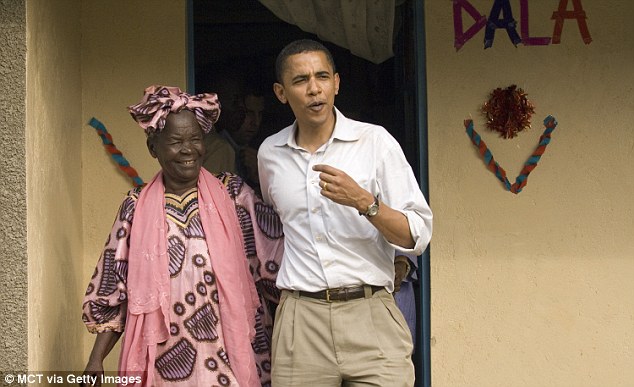 President Barack Obama’s Kenyan grandmother, known as Mama Sarah, vowed Friday to cook a traditional meal for her grandson when he visits the East African nation, the birthplace of his father, later this month.

‘With regards to what food I will prepare for Barack on his visit, I will prepare all the traditional food available,’ she said, speaking her Luo language through a translator on a visit to Nairobi.

She tempted him with the offer of dishes including fish, chicken and maize porridge.

‘It does not matter whether Barack is a senator or a president,’ she added. ‘He will have what I have prepared for him.’

Mama Sarah was the third wife of US president’s paternal grandfather, Hussein Onyango Obama, and lives in the small village of Kogelo in western Kenya which is home to a number of the president’s relatives.

She said she had asked him to travel to Kogelo ‘to pay respect to his father’s grave’, but it was not clear if Obama was scheduled to travel outside the capital Nairobi.

Obama’s late father was born in Kogelo and grew up there before travelling abroad to study, where he met Obama’s American mother in Hawaii.

Although Mama Sarah is not a blood relative, Obama calls her ‘granny’ and has visited her in the past.

Do you think we should care that people in other parts of the world eat animals that we consider pets?
Endnotes: