Donald Trump rips RNC on stacked crowd at GOP debate: “The RNC better get its act together,” 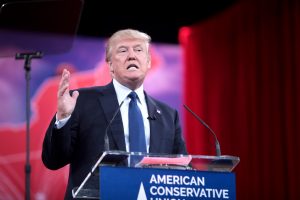 [1]I think the RNC will take Trump more seriously the more he continues to dust the rest of the GOP establishment field. The boos are not hurting Trump with the national audience. But, Trump is setting a marker and is again negotiating with the RNC.

“I did well in the debate. A lot of people said I won that debate. But … the whole room was made up of special interests and donors, which is a disgrace from the RNC,” Trump said at an event in Mount Pleasant, South Carolina.

“The RNC better get its act together,” he added.

Trump was repeatedly booed[3] at Saturday’s debate, which was hosted by CBS News. At the time, Trump confronted and dismissed the people booing him as big-money donors and lobbyists who supported his rivals on the stage.

But Sean Spicer, the RNC’s communications director, suggested that Trump’s claim was unfounded.

The RNC does a terrible job — a terrible job. And just remember what I said — remember in this room — I signed a pledge. But it’s a double-edged pledge. And as far as I’m concerned, they’re in default of their pledge when they do that.