Don’t Drink The Water In This Texas Town 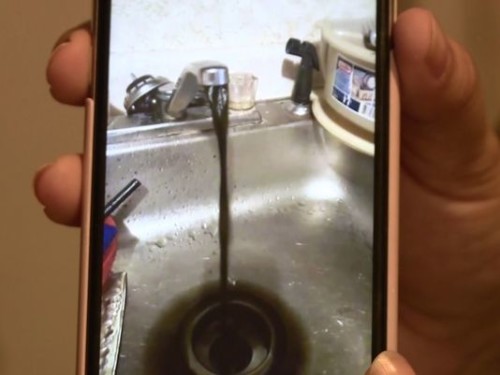 Crystal City’s water isn’t so crystal clear [2]these days. In a government blunder, the city failed to notify the residents that they would be cleaning the sludge out of the elevated water tank. And so black water is flowing from faucets all over town. What would you do if this was your town?

Crystal City, Texas, residents are disgusted and angry as water runs black from their faucets.

Residents are reporting black water is coming from their sinks and bathtubs.

“We didn’t get a proper warning,” resident Nora Flores-Guerrero told KSAT. “They didn’t post anything or send out any type of message to warn the residents.”

“It looked like black sludge. They were comparing it to oil. (It was) that dark,” she said, adding that it had a bad odor

City Waterand Wastewater Superintendent Carlos Ramirez said the water tower for the city has not been cleaned in 20 or 30 years.

In a statement issued Thursday, the city said draining its elevated tank caused sediments and deposits at the bottom to pass through residents’ homes.

The city asked residents to boil or run water before using it.

A spokeswoman from the city’s water department did not want to give her name, but told The Huffington Post that, as a precautionary measure, the city is giving bottled water to the elderly Friday.

The city is also giving portable water to homes affected by the issue.

Perhaps these inept city council members should have to drink and bathe in some of this disgusting water. How hard would it have been to warn residents and prepare for this event? Here’s hoping these clowns don’t get re-elected. To paraphrase a Doobie Brothers song, “black water keeps rollin’ on past just the same” old corrupt government officials, time after time. It matters who gets elected. Your health may just depend upon it.