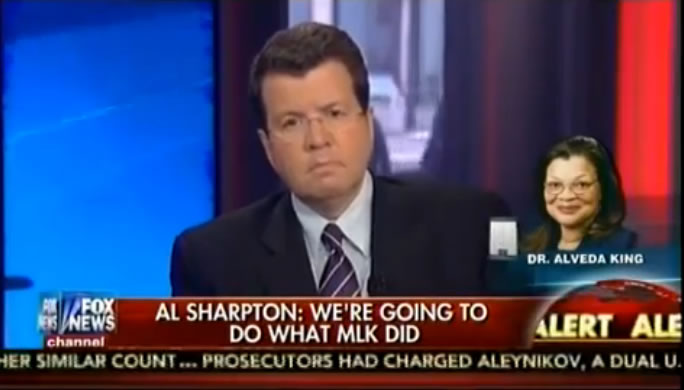 [1]The Reverend Al Sharpton is now trying to use the good reputation and memory of Martin Luther King, Jr., to support his defense of the Baltimore riots, declaring that youth were also violent during MLK, Jr.’s era, implying that King condoned it. Fortunately, Dr. Alveda King, MLK Jr.’s niece, was on hand to dispel the propaganda and misuse of her uncle’s legacy.[2]

According to IJ Review, she told Neil Cavuto on Fox News,

“I’m astounded, because when Reverend Sharpton says you need to do research–research will show that my uncle, Dr. Martin Luther King Jr., my father, Reverend Alfred Daniel Williams King…Reverend Hosea Williams even–who actually came from a background where it would have been easy for him to be violent–they were trained in non-violence, conflict resolution…

When they bombed our house…daddy stood on the car and he quelled the violence, asking them to pray rather than to fight.

So yes–do your research, and every time, you will see…young people following non-violent conflict resolution. Did they want to riot? Yes–but there was a standard, there were teachers, there were leaders who helped them not fight.

So Reverend Sharpton might have to do some research himself.”

Thank goodness Dr. Alveda King is around to stand up for the truth against race-baiters like Sharpton, who actually cause more racial division instead of healing it. Watch Sharpton’s ridiculous remarks and King’s discussion with Cavuto below.