Drudge Unleashes Against GOP in Rare Twitter Tirade: ‘It’s the Night of the Republican Suicide’

Democrats had opposed the President’s recent trade bill[1], but now Matt Drudge has lit in to Republicans[2] for passing it as well. 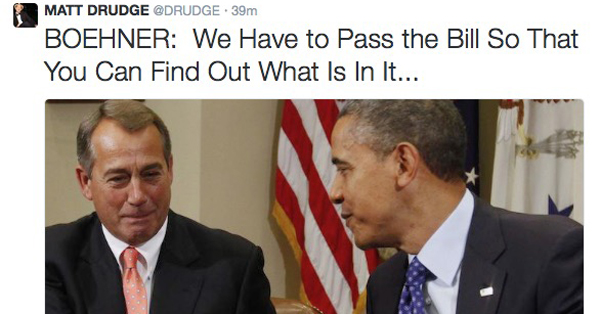 “Twisted DC: Electing Republicans is guarantee of MORE powers for Obama… of course none of them read ‘secret’ bill!” Drudge tweeted.

The Drudge Report founder then set his sights on Speaker of the House John Boehner who expressed support for the trade bill after the Senate’s passage.

It’sa strange time to be alive when Matt Drudge finds himself on the same side as Elizabeth Warren.  What do you guys think?  Are you for/against the TNA?