It’s a sad state of affairs when you’re sure that you’re going to be sexually harassed when you step out of your house. What’s worse in living in a country where you can’t even carry pepper spray to defend yourself, and your concerns are being dismissed as “racist.”[1] 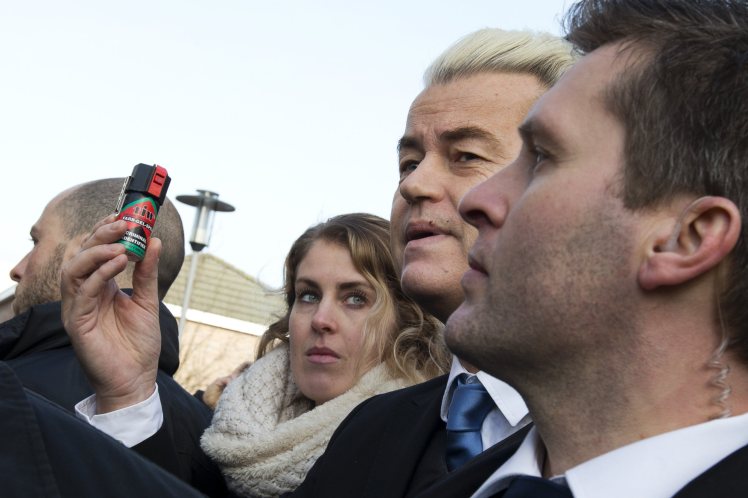 Firebrand Dutch lawmaker Geert Wilders holds a can of pepper spray prior to handing out “self-defense sprays” to women fearful of being attacked by migrants in the wake of the New Year’s Eve sexual assaults in Cologne, in the center of Spijkenisse, near Rotterdam, Netherlands, Saturday, Jan. 23, 2016. Saturdayís event was a trademark headline-grabbing foray into the Dutch public by the leader of the Freedom Party. Such publicity stunts have landed him atop Dutch opinion polls a year away from parliamentary elections in the Netherlands. (AP Photo/Peter Dejong)

Wilders has seen his popularity soar on the back of the refugee debate and he’s got his eyes on the top seat, hoping to become the Netherlands next Prime Minister.

Yesterday, he went to Spijkenisse to speak about his message on the ‘Islamic invasion’.

He also handed out fake pepper spray. Pepper spray is illegal in the Netherlands, so they were filled with red paint instead.

As he handed it out he said: ‘We must close the borders.’

Women should be allowed to carry pepper spray, he said, to protect themselves against what he termed ‘Islamic testosterone bombs.’

But his radical rhetoric drew a counter demonstration from a few dozen women protesters who shouted out: ‘Wilders is racist, no feminist.’

About 10 women were arrested at the protest, Dutch media said.

The Netherlands, a country of 17 million people, took in record numbers of asylum-seekers in 2015. About 54,000 of the one million refugees, who have travelled into Europe from the Middle East and Africa, have been registered here.

Dutch Prime Minister Mark Rutte warned this week the EU has only about two months to tackle the crisis before a new spike in refugees in the spring.

‘Let me be clear: the current numbers aren’t sustainable. We are running out of time. We need a sharp reduction in the coming six to eight weeks,’ Rutte told the European Parliament in Strasbourg, France on Wednesday.