Editor Destroyed for Advocating Writing About People From Other Cultures

Totalitarian ideologies do not hesitate to devour their own servants. It is through terror that rigid, unquestioning compliance is assured. For example, Stalin’s apparatchiks lived in constant fear that they would suddenly be denounced for imaginary thought crimes and either be shot or be banished to a gulag. For a more recent example, from Canada’s soft tyranny,

The Writer’s Union of Canada, which publishes the quarterly magazine Write: The Magazine of The Writers’ of Union of Canada, just issued a public apology online after one of their editors, Hal Niedzviecki, wrote an article in Write magazine titled, “Winning the Appropriation Prize,” in defense of allowing non-Native writers to “write what you don’t know.”

The idea of Niedzviecki’s piece is that white fiction writers should include characters that are not white, even though they cannot directly know what it’s like not to be white. This is what writers do: put themselves in other people’s shoes. If all writers could write about was what it was like to be a writer, they wouldn’t have many readers. Tolstoy was never Napoleon; that didn’t stop him from writing War and Peace.

Imagine the outcry if someone called for excluding nonwhite characters from fiction.

Yet Niedzviecki, who was unlikely to have achieved his position without being a liberal, was viciously denounced for thought crime.

From the official statement from the Writer’s Union of Canada:

The Writers’ Union of Canada deeply regrets the pain and offence caused by an opinion article in our member publication, Write magazine. The Writer’s Prompt piece offended and hurt readers, contributors to the magazine and members of the editorial board. We apologize unequivocally. …

The editor of Write magazine has resigned from his position, and the Union has accepted his resignation.

Writing about nonwhites is now considered to “silence” nonwhites. Advocating it is proactively forbidden, and thus Niedzviecki must be destroyed for his transgression.

How can you write anything remotely honest in an environment dominated by totalitarian witch-burners who might declare anything you say to be heresy, no matter how sensible or well-meaning? You can’t. This is why there weren’t any more Tolstoys after the communists took over Russia. 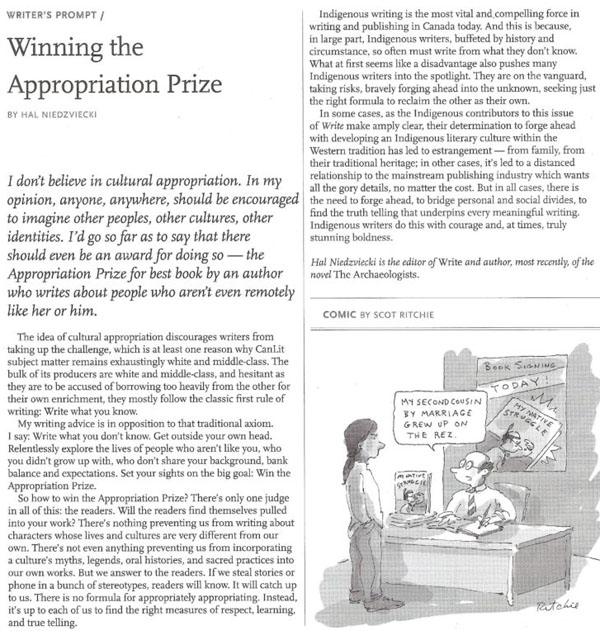 He will henceforth be known in his field as an unclean oppressor of Sacred Indigenous Peoples.

At least Niedzviecki only had his career wrecked, instead of having to work himself to death at a labor camp in Siberia. But the stultifying effect on the culture is the same.