Honestly, you simply cannot make this stuff up. In IRAN?? Seriously? According to the UK Telegraph, “Eight of Iran’s women’s football team are actually men awaiting sex change operations, it has been claimed. Does this secret change things?[1] 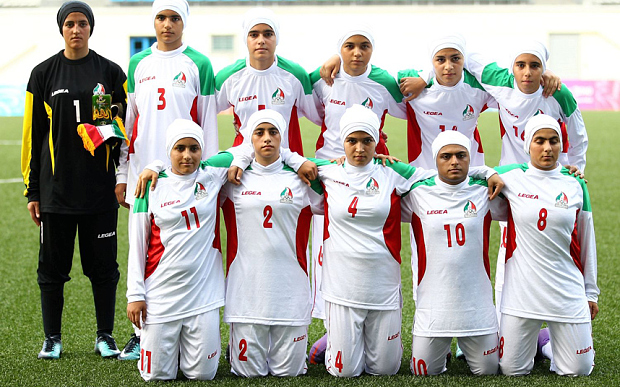 The country’s football association was accused of being “unethical” for knowingly fielding eight men in its women’s team.

Um, hate to be awfully bigoted from a “binary gender” standpoint, but take a look at that photo and tell me which two YOU think are actually gen-yoo-wine gals.

So the question I have is, are these eight players really keen to trans their genders, or are they simply cheating? You’d think it might be the latter, but here’s another shocker.

The Telegraph also reports “Gender change operations are legal in Iran according to a fatwa – or religious ruling – pronounced by the late Ayatollah Ruhollah Khomeini, spiritual leader of the 1979 Islamic revolution. The law contrasts with the strict rules governing sexual morality under the country’s Sharia legal code, which forbids homosexuality and pre-marital sex.

Sex changes are commonly carried out in phases in Iran, with the full procedure taking up to two years and including hormone therapy before the full gender transformation is completed.”

Well, I guess our own liberal left has more in common with Iran than we even knew! The transgender movement is hot and trendy in Iran as well.

I think the very best thing to improve Iranian-U.S. relations would be to arrange an “exhibition match” and invite Caitlyn Jenner to play, don’t you? She’s an amazing natural athlete, after all. And she is absolutely the spokesmodel for the transgender movement after her Arthur Ashe Courage award from ESPN.

We need an American with courage dealing with Iran, because we certainly don’t have that in the White House. Oh, and on that subject, in case you didn’t see Benjamin Netanyahu deliver an absolute SMACKDOWN at the United Nations, check this out. Now THIS is a REAL man with courage!

Even if they feel like the opposite sex on the inside then what they were born as….they are still the same on the outside..therefore a total disavantage for the other teams. C’mon!