How can your heart not break for this poor baby? Someone hurt her, badly enough to take her life, and the evidence looks like it points to the worst possible suspect – her own father. The horrifying details of her death and circumstantial evidence are enough to make almost anyone cry. This little girl is with God, now: 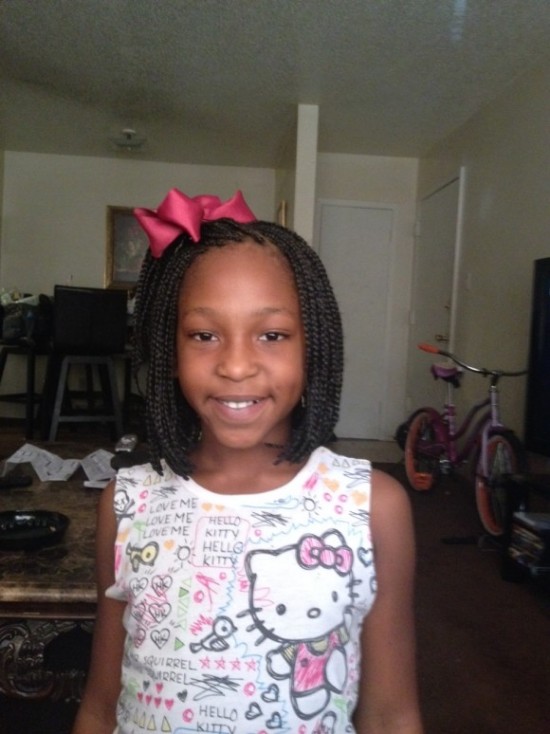 The relatives of an eight-year-old girl who died as she was allegedly sexually abused by her father have heard horrific details in court of how her murdered body was found. Hiawayi Robinson’s body was found partially unclothed at a dumping ground in Prichard, Alabama on September 18 – two days after she was reported missing after heading out to meet her father.

Her crumpled body was surrounded by trash, her Hello Kitty t-shirt was pulled up and her purple shorts and underwear were pulled off one leg and hanging around the other knee, Agent Deric Taylor of the State Bureau of Investigations testified in court, Al.com reported.
The details emerged on Monday during a preliminary hearing in the case against her father, Hiawatha Robinson, 38. After the testimony, the judge ruled that a grand jury should hear the case.

During the hearing, Hiawayi’s relatives cried softly – and one relative became so emotional that she fled from the courtroom, the website reported.

Robinson, who joined the search for his daughter when she vanished and made a public appeal for her safe return, has been charged with felony murder and first-degree sodomy.

The Mobile County District Attorney’s Office believes Hiawayi died during a sexual assault but have not provided further information about how exactly she died. Robinson’s attorney, Jeff Deen, said that there is no DNA evidence connecting him to the case. A swab was taken of the little girl’s body and, while semen was found, the swab was contaminated and a DNA test could not be carried out, Deen said.

‘They don’t have any DNA connecting him to the case,’ he told Al.com. ‘They have some circumstantial evidence. The people that I’ve talked to that seem to just come up to me, that seem to know Hiawatha, they can’t believe that he would be involved in something like this.’
But prosecutors believe the young girl’s father was to blame.

‘The facts will show that while engaging in sodomy in the first degree, Hiawatha Robinson Jr. caused the death of Hiawayi Robinson,’ Mobile County District Attorney Ashley Rich said while announcing the charges last month.

Rich is waiting for more results from the FBI crime lab in Quantico and said there are ‘dozens and dozens’ of pieces of evidence. In Alabama, the charge means someone is accused of engaging in ‘deviant sexual intercourse’ with someone under the age of 12, AL.com reported.
‘Deviant sexual intercourse is defined in the law of the state of Alabama as sexual gratification involving the sexual organs of one person and the mouth or the anus of another person,’ Rich said.

Rich would not say whether the alleged abuse by the father had been ongoing.

On the day she vanished, Hiawayi returned home from school to change her clothes because she was wet from the rain. Her father then called her and they spoke for 17 minutes, Taylor said. Hiawayi then told her grandmother she was heading to her cousin’s apartment in the same complex because her father was going to meet her there to give her $150 for her birthday.But the cousin later told police she would not have been at the apartment at that time.

Hiawayi headed out and never returned home. She was reported missing by her grandmother around 10pm that evening.

After she went missing, authorities looked at surveillance footage taken from businesses along a strip mall near their home and saw a red SUV driving along the road. That day, her father had been driving his girlfriend’s red Chevrolet Tahoe, authorities said. In separate surveillance footage from a store that afternoon, Hiawayi could be seen buying candy and then heading in the direction where the SUV was seen.

Fifteen minutes after she left the store, her father called her grandmother to see where the little girl was, authorities said.
During a later search of his girlfriend’s car, police found a clear hair bead, like those worn by Hiawayi, and black duct tape, Al.com reported.

Her body was found two days later around a mile from their home, behind an abandoned building. If Robinson is found guilty of all current charges against him jurors would be unable to hand him the death penalty as he has not been charged with capital murder. There might not be justice for this little angel by taking his life, but I am sure that this crime will haunt him the rest of his days, and that there is a special place in hell for people just like him.