Elderly Man Was Being Attacked in a Parking Lot, but It Came To A Quick Stop After a Concealed Carry Holder Walked Up

A young shopper was leaving a grocery store Wednesday night and came upon a parking lot brawl. It wasn’t just a brawl between two men – it was a group of men attacking an elderly shopper. Stepping in where many people would have walked away[1], Gene kept the man from being injured further. 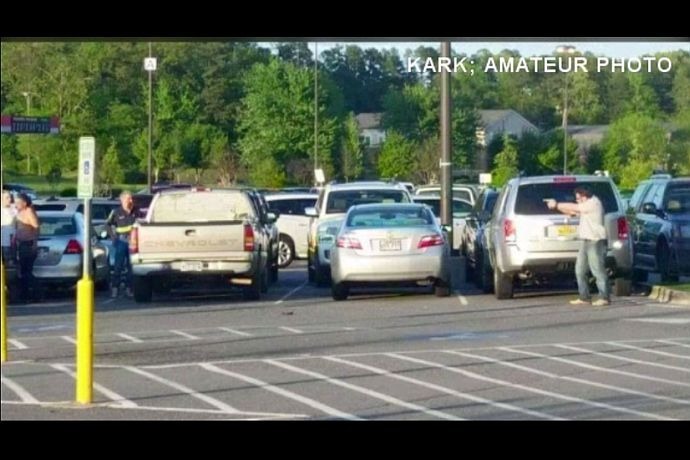 So the 24-year-old Kroger shopper — who gave only a first name, Gene — decided to do something about the scene in the Little Rock parking lot.

He told KOLR he threw down his bags, stepped to the side — and then pulled out his gun and pointed it at the group.

“I was freaking out,” he told the station. “I was shaking.”

But the move got the group’s attention. ”They kept yelling this isn’t your fight, you need to walk away, you need to put the gun down,” Gene recalled to KOLR.

By this point, other shoppers had pulled out their cellphones and began documenting the standoff and calling police. ”Some lady behind yells, ‘There’s a man with a gun,’ to 911,” Gene said.

The group and the victim took off before police arrived. Police said they’re all related, and it was a nephew attacking his uncle. The victim, his face bloodied, told police he didn’t want to press charges.

While Gene told KOLR it was the first time he’s drawn his weapon after years of legally carrying one, he would make the same choice if faced with the situation again.

“When you see a crime happening and you see someone getting injured, if you have the ability to stop it, you should do so,” he said.

Gene said he didn’t have it in mind to pull the trigger, and made sure to keep his finger away from it during the altercation.

As for other shoppers interviewed about the incident, they supported Gene’s actions.

“The guy did the right thing,” one woman said.

Again, the only thing that many criminals will respect is someone with more physical or firepower than they have. If not for someone stepping in, this gentleman would have likely been more seriously hurt.