EPIC Response From Marine About Not Wearing His Uniform

After being informed that the Community Organizer In Chief recommended closing the office blinds and wearing civilian clothes to work as a way for military recruiters to avoid terrorist attacks, one Marine posted an EPIC response on his Facebook page. Awesome[1]: 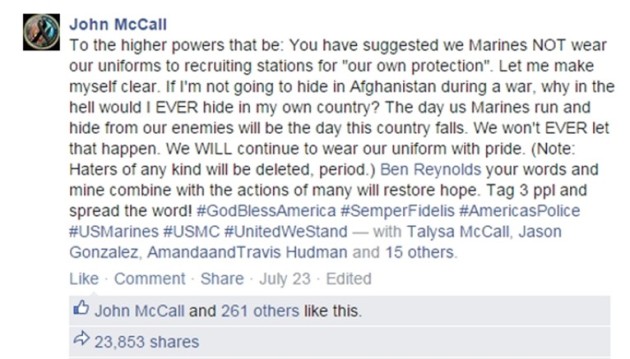 And can you blame him? Does the Pentagon want the Marines to change their slogan from “The few, the proud, the Marines” to “the few, the disarmed, the hiding?”

Hat tip to Freedom Outpost for pointing out this outstanding response from John McCall, a motor transport operator in the Marine Corps since 2009 as well as the Director of Marketing for Visalus Sciences and Lead Technician for Steel Dynamics, Inc.

Just a few days ago, the Obama Pentagon refused to acknowledge the rights of its military members to arm themselves at recruitment offices. Instead, they told them the same thing troops were told in Europe back in November: Don’t wear your uniforms and “close the blinds” for their own protection.

In response to the recommendations, McCall posted on Facebook, “To the higher powers that be: You have suggested we Marines NOT wear our uniforms to recruiting stations for “our own protection”. Let me make myself clear. If I’m not going to hide in Afghanistan during a war, why in the hell would I EVER hide in my own country?”

I have to say that this Marine absolutely NAILS it. There is a need now more than ever for recruiters to be armed. Hopefully, this will send the message to the Pentagon LOUD and CLEAR.