Instapundit[1] says “blame Catharine McKinnon” (who pioneered the legal theory of sexual harassment as a violation of the 1964 Civil Rights Act) for two recent deaths at the University of Iowa[2]:

For the second time this year, a professor at the University of Iowa has taken his own life after being accused of sexual harassment. . . .
On Wednesday, just a week after he was accused of sexual harassment in a lawsuit, Mark Weiger[3] killed himself. He was a professor of music known for his oboe performances and teaching. A former student and teaching assistant’s lawsuit, filed in federal court against Weiger and the university, charged that he had a romantic relationship with another student, engaged in repeated classroom banter and touching of an inappropriate nature, and created a sexually hostile environment. According to the suit, the university conducted its own investigation of the situation last year, found Weiger had violated policies against sexual harassment, and then resolved the issue “informally.” He was found in his car, dead from carbon monoxide poisoning, with the garage door at his home closed. Authorities said he left a note.
In August, [66-year-old political science professor] Arthur H. Miller was arrested on bribery charges and accused of telling female students that he would give them higher grades if they let him fondle their breasts. In one case, he is alleged to have grabbed and sucked on a student’s breast and then sent her an e-mail telling her that she had earned an A+. He then shot himself in a local park.

Note that “classroom banter” now qualifies as grounds for a federal civil-rights lawsuit, whereas soliciting oral sex from interns in the Oval Office — hey, what kind of right-wing prude would object to that?

Sexual harassment law does not prevent professors or anyone else from using positions of power to obtain sexual favors. That happens every day. What it does is punish the unattractive and awkward — those who fail in the pursuit of seduction — whereas the attractive and charming succeed, and are cagey enough to avoid legal entanglements. There are probably oboe professors who are getting all the undergrad action they can handle, but they are the cute and clever ones. It is only the clumsy rejects who get accused of harassment.
If Title VII abolished one sort of inequality, it institutionalized another. And remember: Equality is for Ugly Losers![4] 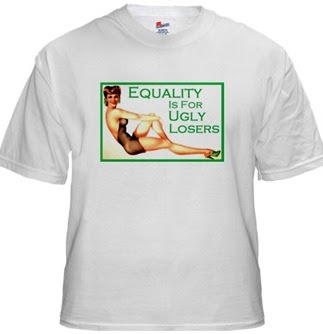 (Cross-posted at The Other McCain[6].)