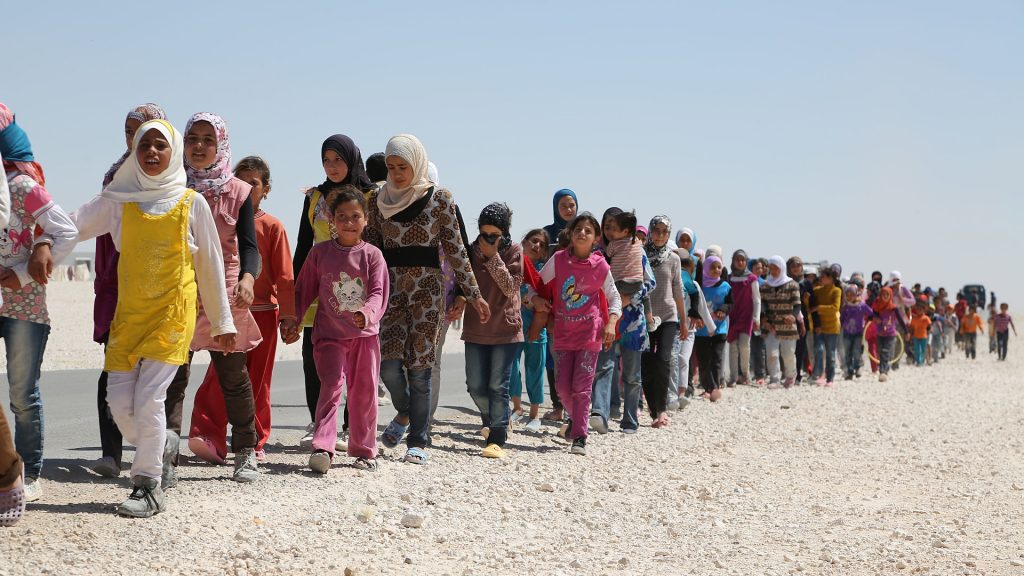 No one could have predicted that left-leaning German Chancellor Angela Merkel would call for banning[2] hijabs. The open borders policy European countries have taken toward refugees fleeing the Middle East due to ISIS has resulted in violence increasing in those countries, with ISIS infiltrating the refugees. Facing a tough reelection next year as a result of allowing over a million refugees into the country, Merkel finally reversed her position. In November, she called[3] on the EU to start turning back boats full of refugees as they cross the Mediterranean.

The terrorist attacks by refugees are continuing. On December 19, a radical Islamist refugee drove a truck into a market in Berlin, killing 12 people and injuring 48. The refugees are raping women and destroying property. In Italy, for example, “for the first time, the crime rate in the north of Italy, which has the highest concentration of immigrants and asylum seekers, is surpassing that of the south,” Breitbart reported[4]. A study in Italy found that where the immigrant population increases by 1 percent, the crime rate goes up  0.4 percent. Italian businesses have lost billions of dollars due to refugee related problems such as counterfeiting, shoplifting and illegal vendors.

Many of the refugees don’t have jobs, putting a strain on government budgets. Only 34,000 of the 1.2 million refugees in Germany have found[5] jobs. Shariah law is gradually being implemented in some of the countries, as officials accommodate their intolerant religious views.

The European Union set up a quota system requiring member countries to accept a certain number of refugees. The refugees mostly arrive by boat in Turkey, Greece or Italy, and then disperse throughout Europe. They are not screened; there is no way to determine their true nationality or names. The number of refugees is likely to increase, as the atrocities in Aleppo, Syria, continue escalating.

News of the free welfare from Europe’s socialist and borderline socialist countries has spread to Africa, and so migrants from that continent – not even refugees fleeing persecution – are now flooding[6] the shores of Italy even more than Greece. The Balkans closed its borders in March, but smugglers are still getting the refugees to western Europe.

Professor Anna Bono of the University of Turin, an expert in African migration, revealed[7], “In the countries of sub-Saharan Africa there are advertisements inciting people to go to Italy, explaining that everything here is free.” Half of the prostitutes in Italy are Nigerian.

Obama is following  suit, allowing thousands of refugees into the U.S. Each one costs[8] taxpayers $64,370 for their first five years here; 91 percent receive food stamps and 68 percent receive cash assistance. Of the total 85,000 refugees admitted into the U.S. last year, a record[9] 38,901 were Muslims, a higher number than Christians admitted. There were 12,587 refugees from Syria alone, 99 percent who were Muslims.

In contrast, a country very similar to us, Australia, announced[10] in October that it would not be accepting any refugees, with few exceptions. Prime Minister Malcolm Turnbull, no conservative, had reportedly been turning away refugee boats that arrived on the country’s shores previous to the announcement. Instead, he has agreed[11] to take refugees from Central America who are not Muslim.

Several central European countries have objected to the resettlements, filing lawsuits against the U.N. The Schengen Agreement abolished border checks between European countries, which some countries are defying by erecting border fences. Opposition to the open borders policy is high[12], with 94 percent of Greeks disapproving.

Slovakia’s Prime Minister Robert Fico said[13] earlier this year that Slovakia would accept a small number of Christian refugees but not Muslims “who would like to start building mosques all over our land and trying to change the nature, culture and values of the state.” Czech President Miloš Zeman, who is a social democrat (and former communist), no right winger, has been the most scathing[14] leader. He denounced the prime minister’s plan to allow a mere 80 refugees from Syria into the country, saying it would result in “barbaric attacks.” He said even moderate Muslims could be radicalized to commit terrorist acts similar to how regular Germans went along with the Nazi regime. He blanketly condemned Islam, “The attitude of Islam – I do not speak about jihadists, I speak about Islam – towards women, half of the population. As you know, in the Qur’an, women is something like the inferior part of mankind.”  However, Zeman’s position is mostly ceremonial.

The refugee crisis has sparked[15] the rise of populist movements across Europe. Right wing Marine Le Pen has a shot at a presidential bid in France, as does Geert Wilders in the Netherlands.

In a moment of irony, the open borders organization Doctors Without Borders announced[16] in March that it would no longer assist refugees at a center on the Greek island of Lesbos, due to the inability of the government to properly accommodate them all.

France 24 reported that at least 3,800 migrants died[17] in the Mediterranean Sea between January and October attempting to reach Europe, making it the deadliest year in the Mediterranean. A realistic solution would have been to create a temporary place for the refugees near their home countries, such as in Jordan. These people love their countries and their culture. Where were leaders with the guts to implement this?

Will this massive migration from poorer countries lead to the destruction of Western civilization as laid out in the 1973 dystopian novel The Camp of the Saints[18]? In the book, all countries are forced to open their borders, resulting in rape and ruin. The title is a reference to Revelation 20:9, “They marched across the breadth of the earth and surrounded the camp of God’s people, the city he loves. But fire came down from heaven and devoured them.” There is no divine intervention in the book. While the allusion to Western civilization as God’s people came under fire as racist, journalist Lionel Shriver admitted the book was  “prescient.” Another reviewer wrote that Raspail “was neither a prophet nor a visionary novelist, but simply a relentless historian of our future.”

The left-leaning European leaders who authorized the flood of refugees in the interests of forced “diversity” are now experiencing the consequences. Compelling two cultures to merge, where one’s holy book instructs its believers to destroy nonbelievers, will ultimately destroy Western Civilization.