Fairy Tales WITH GUNS? Thanks, NRA!

Finally, someone has written a fairy tale I can actually get excited about reading to the little folks when they come over. NRA Family[1] has a new fairy tale series that not only brings a new twist by arming the usual ‘victims’, but also educates children on the importance of gun safety as well[2]. 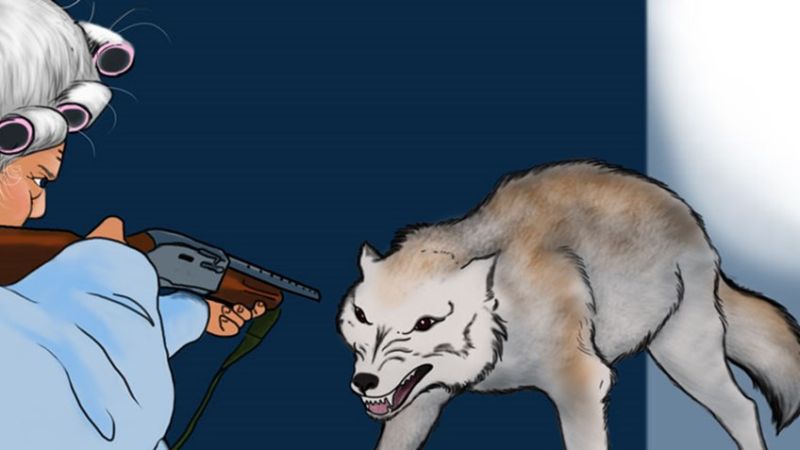 Aaaannd there goes our childhoods.

In a new series on NRA Family, author and conservative blogger Amelia Hamilton is rewriting classic fairy tales to include guns.

The goal of the series is to show how firearms would have helped each story’s protagonists find their happily ever after a whole lot faster.

In an editor’s note about the series, NRA Family writes:

Most of us probably grew up having fairy tales read to us as we drifted off to sleep…Did any of them ever make your rest a little bit uneasy? Have you ever wondered what those same fairy tales might sound like if the hapless Red Riding Hoods, Hansels and Gretels had been taught about gun safety and how to use firearms?

So far the NRA has already published two stories, (the not-so-creatively titled) Little Red Riding Hood (Has A Gun) and Hansel and Gretel (Have Guns), with a third story, The Three Little Pigs (Have Guns), due in May.

And in case you were wondering: Yes, the stories are as strange as they sound.

Little Red Riding Hood is a more traditional retelling — the guns only serve as a measure of protection against the big bad wolf.

“One birthday not long ago, Red was given her very own rifle and lessons on how to use it—just in case—to be sure that she would always be safe. So, with a kiss from her mother, rifle over her shoulder and a basket for her Grandmother in her hands, Red took a deep breath and entered the woods.”

“Before long, he heard a familiar voice call ‘Grandmother, I’m here!’ Red peeked her head in the door. The wolf couldn’t believe his luck—he had come across two capable ladies in the same day, and they were related! Oh, how he hated when families learned how to protect themselves.”

Hansel and Gretel, however, transforms so much in Hamilton’s version with guns that, while they share the same protagonists, calling it a rewrite seems inaccurate. Rather than being about kids who are abandoned in the woods by their family, the tale is about siblings who get lost while hunting.

“What will we do,” their mother cried, “if we can’t feed our family through the winter?” Hansel and Gretel made a plan to help their family.

Fortunately, they had been taught how safely to use a gun and had been hunting with their parents most of their lives. They knew that, deep in the forest, there were areas that had never been hunted where they may be able to hunt for food.”

Once in the woods, Hansel and Gretel get lost, find the witch’s cottage, rescue two other children, then show the rest of their village where they can hunt for food to survive the rest of the winter.

Since their debut, Hamilton has been making the rounds defending the series.

“It’s not just guns but just general safety,” Hamilton told Cam & Co, a radio show with NRA News that covers Second Amendment-related issues. “That they are avoiding all of these horrific situations that happen in fairy tales that are really very violent in the traditional tellings. If kids are taught safety in general, all of this could be avoided.”

And on Friday, Hamilton told CBS, “The series is really, also for adults. It’s all about safety and it’s for parents to start those conversations.”

Others, however, think the series is just a marketing ploy.

“This to them is about selling guns ultimately,” Ladd Everitt, director of communications for the Coalition to Stop Gun Violence, told CBS. “And if they can reach out to young children and develop customers for the future, they are content to do that.”

Personally, I cannot WAIT to have my niece and nephews overnight again so I can read them these fairy tales. I think they are a great alternative to the same old fairy tales, especially for a NRA member like me to read the future generation of members.