There are a few skills that aren’t passed-down to young men the way they used to be. How to properly load a pipe, how to make and keep a fire going and how to tie a tie are all skills that are in need today, but it’s not uncommon to see even young adults struggle with the skills. When one man witnessed a young man struggling to tie his tie, this elderly gentleman came to the rescue and it just might be enough to restore your faith in humanity.[1] 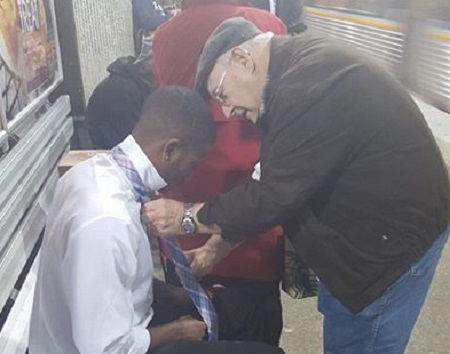 In the midst of all the heartbreaking and disturbing events of the last week, a glimmer of hope has arisen in the form of a photograph posted on social media.

When an elderly woman noticed a young man struggling with his tie at an Atlanta subway station, she prodded her husband to come to his rescue.

He did — without hesitation.

The young guy sitting down was struggling with his tie. The woman in the red coat noticed, and asked ‘Do you know how to tie it properly?’ The young guy said ‘No ma’am.’

She taps her husband and says ‘Come to this side [her right side; he was standing on her left side] and teach this young man how to tie his tie.”

The older gentleman moved without hesitation [almost a reflex response] and gave him a step-by-step tutorial; then – afterward – the elder gentleman watched the young gentleman repeat the steps and show him that he had it.

I was some distance away (but close enough to hear the exchange), and got even closer to snap this candid photo of the tutorial in progress before hopping on the train. I LOVE THIS!

This has been a tough week. College campuses were shut down and last week administrators forced out over perceived acts of racism. The streets of Paris erupted in violence Friday night with brutal attacks by Islamic extremists.

And then we see this photo and description, and realize maybe the whole world hasn’t gone mad after all.

No, the world is still a very dreary place at times. Radical Islam still exists and there is still plenty of bad news. But hopefully, this picture makes your day a little brighter.