I get post blocked by Facebook for 30 days[1] for posting a photo of an overweight person in a suit that said “F*** White People”, but this doesn’t violate Facebook’s standards? Does it violate the NFL’s standards?

This past week has been filled with violent video and images of Black Lives Matter protesters vandalizing property and celebrating the massacre of Police Officers. We even have a story of a BLM protester shooting up a police officers home [3]last night. But what is stirring all of this up and turning what is suppose to be peaceful protesting to make a powerful movement into angry and violent rioting? There have been some irresponsible remarks from people we should be looking up to like Hillary Clinton [4]and Barack Obama. Instead of calming the violence they are feeding to it.

Another public figure decided to post a ‘pretty’ picture on his Instagram account to incite even more violence this weekend. Football running back for the Cleveland Browns posted a sick drawing of a police officer being beheaded saying, “They give polices all types of weapons and they continuously choose to kill us.” Here’s the picture he put up knowing he’s a public figure and that people are interested in what he has to say as a leader… what statement do you think he’s making with a picture like this?: 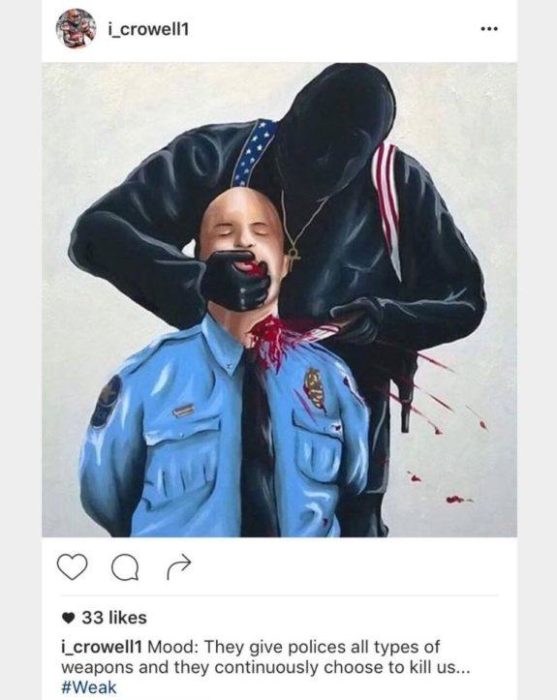 I can assure you that if I posted this photo with a similar or identical caption, I would be fired from every job that I have right now and would be blacklisted from the blogosphere within 24 hours. Let’s hope the NFL does the right thing here.