As if we didn’t have enough to worry about when we go to the airport, this past week, fears surfaced that planes equipped with WiFi could have those systems hacked and exploited to gain control of the planes avionic[1]s.  Terrorist hackers would then be able to fly the aircraft to enemy locations or crash the planes at will. 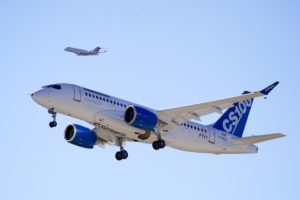 “A terrorist could use a plane’s on-board WiFi to bring down a plane, according to a US government report.

Internet access now available on most commercial flights makes it possible for hackers to infiltrate flight systems that could lead to taking over cockpit controls.

The finding by the Government Accountability Office (GAO) in the US presents chilling new scenarios for passengers.

The report doesn’t suggest it would be easy to do, or very likely.

But it points out that as airlines and the Federal Aviation Administration attempt to modernise planes and flight tracking with Internet-based technology, attackers have a new vulnerability they could exploit.

A worst-case scenario is that a terrorist with a laptop would sit among the passengers and take control of the aeroplane using its passenger WiFi, said Rep. Peter DeFazio, an Oregon Democrat on the House Transportation and Infrastructure Committee, who requested the investigation.

The avionics in a cockpit operate as a self-contained unit and aren’t connected to the same system used by passengers to watch movies or work on their laptops. But as airlines update their systems with Internet-based networks, it’s not uncommon for Wi-Fi systems to share routers or internal wiring.

According to the report, FAA and cybersecurity experts told investigators that airlines are relying on ‘firewalls’ to create barriers. But because firewalls are software, they could be hacked.

‘According to cybersecurity experts we interviewed, Internet connectivity in the cabin should be considered a direct link between the aircraft and the outside world, which includes potential malicious actors,’ the report states.

The GAO released a separate report last March that determined the FAA’s system for guiding planes and other aircraft also was at ‘increased and unnecessary risk’ of being hacked.

One area of weakness is the ability to prevent and detect unauthorised access to the vast network of computer and communications systems the FAA uses to process and track flights around the world, the report said. The FAA relies on more than 100 of these air traffic systems to direct planes.

FAA Administrator Michael Huerta agreed with the GAO’s findings and said the aviation regulator has begun working with government security experts including the National Security Agency to identify needed changes.

‘This threat will continue to evolve and it is something that needs to be at the forefront of our thinking,’ he told a Senate oversight panel.

GAO investigators spoke to cybersecurity experts who said on-board firewalls intended to protect avionics from hackers could be breached if flight control and entertainment systems use the same wiring.”

It may be time for airlines to use separate routers for avionics and WiFi internet.  It certainly would make me feel more comfortable for every time I board an aircraft.