Obama must be one unhappy camper right now. A federal court has ruled that Wisconsin Law is constitutional – voters will have to SHOW ID to vote- and law will be in place for the November Midterms. Democrats, however, are trying to kick back: 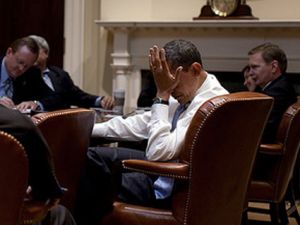 From the Conservative Tribune:[2]

A Wisconsin law requiring voters to provide photo identification is constitutional, a federal appeals court ruled Monday after last month allowing the law to be put into effect pending its final decision.

The American Civil Liberties Union and the Advancement Project oppose the law and have petitioned the Supreme Court to intervene to prevent its implementation, according to Fox News. Nonetheless, state officials are going forward with plans on the assumption that the law will be in full effect for the Nov. 4 midterm elections.

Opponents argued that the requirement disenfranchises poor and minority voters who may not have photo IDs. Supporters say that there is time before the election for the very small number of people who lack identification to get it if they want to vote.

Liberals have traditionally argued against voter ID laws, but conservatives point to fraud allegations — which almost always favor Democrats over Republicans — as justification for their enactment. Despite overwhelming support for voter integrity laws among the American people, the Holder Justice Department has filed suit against them in North Carolina and other states, claiming that they impact minorities disproportionately.

The decision about the Wisconsin law is especially important this year, given the tough race between Republican Gov. Scott Walker and Democrat Mary Burke.
The 7th U.S. Circuit Court of Appeals said that Wisconsin’s law resembles one in Indiana that the U.S. Supreme Court has already upheld.

The law will allow anyone without a government-issued ID to cast a provisional ballot, but they would then have to present the required photo ID to elections officials by 4 p.m. on the Friday following the election or the ballot will not be counted.

Click here for details on the Democrats currently under investigation for voter fraud.

Democrat concerns about poor and minority voters lacking ID simply carry no weight; virtually everyone has ID, and those who do not can easily obtain one. It is Democrats, after all, who are famous for getting constituent groups to the polling places on Election Day.

All they need do now, if lack of ID is really a problem, is use a similar effort to get them to the DMV.

If no such Democrat effort is forthcoming, it will be a clear indication that disenfranchisement was never truly their concern

The idea that ID somehow marginalizes and targets those of lower class is ludicrous. ID is easily obtained – unless, perhaps you are not here legitimately? This whole thing does not pass the smell test. The reasoning behind this is foul. What are the democrats REALLY trying to accomplish here? Allowing dead and illegal voters to go to the polls? That’s sure what it seems like….what do you think?