In yet another victory for those who value human rights and our constitutional protections of such rights, a federal judge slammed D.C.’s gun requirements as unconstitutional- another defeat for those who are being dragged kicking and screaming into the age of enlightenment. The Free Beacon[1] reports: 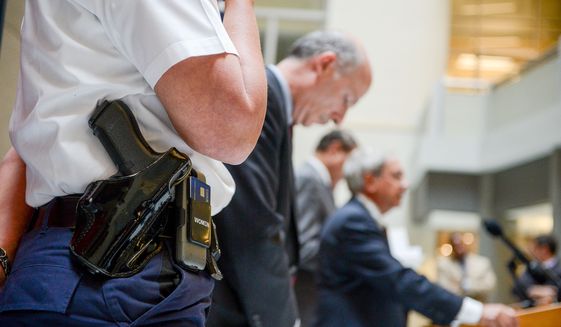 A federal judge has issued a preliminary injunction saying the District of Columbia’s new concealed carry law is unconstitutional.

The order[3], issued Monday by Judge Frederick J. Scullin, was the second decision in less than a year declaring the Washington, D.C., gun carry laws to be unconstitutional. In October of 2014, the same judge ruled that the district’s complete ban on gun carry was also in violation of the Constitution.

Scullin barred DC Metropolitan Police Chief Cathy Lanier from enforcing the city’s requirement that a person applying for a concealed carry permit must prove they have a “good reason” to need one. This requirement created a system where only those with police reports detailing violent threats against them could obtain a permit.

Critics said the requirement was the reason few permits had been issued[4] thus far, and argued that it violates the Second Amendment.

The “good reason” clause was used to deny three men who wished to carry weapons in the District permits. The men—Joshua Akery, Tyler Whidby, and Brian Wrenn—joined with the Second Amendment Foundation to file suit against the city[5].

In Monday’s order, the court sided with the plaintiffs.

“This conclusion should not be read to suggest that it would be inappropriate for the District of Columbia to enact a licensing mechanism that includes appropriate time, place and manner restrictions on the carrying of handguns in public,” Judge Scullin said in his ruling. “The District of Columbia’s arbitrary ‘good reason’/’proper reason’ requirement, however, goes far beyond establishing such reasonable restrictions.”

“Rather, for all intents and purposes, this requirement makes it impossible for the overwhelming majority of law-abiding citizens to obtain licenses to carry handguns in public for self-defense, thereby depriving them of their Second Amendment right to bear arms.”

The plaintiffs say they are pleased with the ruling. “This is a devastating loss for the District and its anti-gun-rights policy,” Second Amendment Foundation executive vice president Alan Gottlieb said in a statement.

The Judge also ordered that lawyers from both sides meet on July 7 to “discuss an expedited schedule for the resolution of this case.”

The city’s attorney general is looking at Judge Scullin’s ruling but still believes the District’s concealed carry law is constitutional. “We are reviewing the ruling; however, we believe that the law passed by the Council is constitutionally valid,” OAG spokesperson Robert Marus told the Washington Free Beacon.

If D.C. decides to fight the court’s ruling, the plaintiffs will continue with their case. “If they do not comply with the court order we will move to hold them in contempt,” Gottlieb said.

“We will take this case all the way to the U.S. Supreme Court.”

We all could have saved a bunch of time if the bureaucrats in D.C. would have simply marched on down to the National Archives and actually read the Second Amendment to scan for any mention of the words “good reason.”