Feds Likely Punishing Sheriff Joe for Speaking Out Against Obama 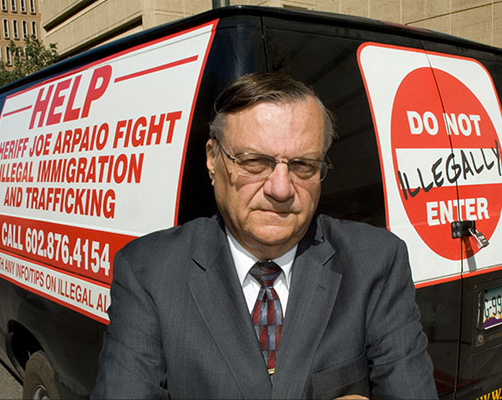 [1]Sheriff Joe Arpaio’s Maricopa County Sheriff’s Office is the only law enforcement agency in the nation to have its participation terminated in a federal program providing surplus military weapons to local cops. Numerous law enforcement agencies around the country have been unable to account for some of the weapons that were transferred to them through the program – most likely due to small technical accounting errors, nothing nefarious –  yet Arpaio’s agency is the only one to receive more than a temporary suspension. [2]

According to Western Journalism,

Over the past two decades, Arpaio explained, the MCSO has lost track of nine weapons. As a result, his department is now being forced to return every item received through the federal program over that period. Among the equipment his agents must now give back are about 200 weapons, a pair of armored vehicles, and a large collection of night vision goggles. All of the equipment must be returned within four months.

The high-profile sheriff indicated that he is not deterred by the decision.

“It really doesn’t mean anything,” he said. “Look at the handguns. They probably don’t work anyway. We have plenty of our own.”

As for the night vision goggles, he said his agency is in the process of obtaining more effective versions.

“We were buying those anyway,” he explained. “We have the money.”

While he said there have been multiple efforts to recover the misplaced guns, many were lost before sophisticated tracking technology existed.

This targeting is no coincidence. Sheriff Arpaio is one of a handful of sheriffs who have loudly challenged Obama for abuses of power and more. Obama is continuing a pattern of using his office to go after his political opponents. It is a frightening abuse of power by Obama, not Arpaio, to have those in charge of the law use it to make conservatives in charge of the law look like wrongdoers.  Until it can be proven in a court of law that Sheriff Arpaio did anything wrong by not keeping technical records to the degree required in regards to the weapons transfer, this is nothing more than a political witch hunt without due process of law.