Sophie Sheldon has been spared jail after she repeatedly punched an innocent man in an attack that left him blind. What is even more outrageous is that she then gloated about her release on Facebook, posting a picture of her giving the “thumbs up.”[1] 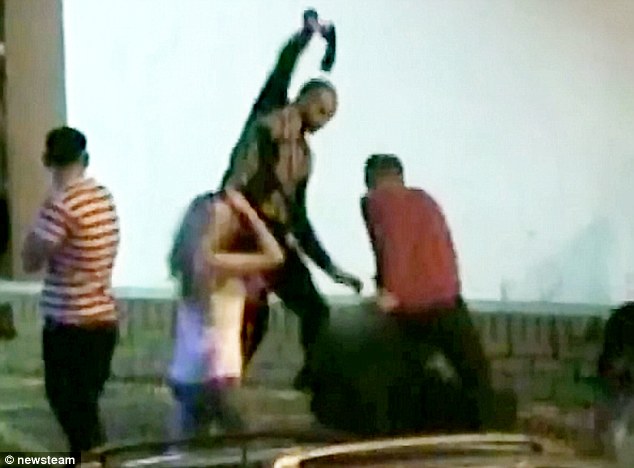 A woman who repeatedly punched a man in an unprovoked attack boasted about walking free from court – while posting photos on Facebook with her thumbs up.

Sophie Sheldon was part of a group of drunk thugs who partially blinded a man in the brutal attack outside a nightclub in Birmingham.

CCTV footage shows the 20-year-old leaning over the helpless victim as he lies in agony on the floor, punching him in the face.

Her accomplices can also be seen lashing Ismail Bensalaman, 33, in the face with his belt, destroying his eye.

She was handed a suspended sentence of two years and a six-month curfew by Judge Paul Farrer, who said the violent behaviour was not in her character.

After she was spared jail this week, Sheldon caused outrage by posting celebratory pictures outside court on Facebook.

The young woman also uploaded an image of herself grinning and giving the thumbs-up in a taxi after her sentencing hearing.

She updated her Facebook status saying: ‘Guess who’s back again, Sophie’s back so tell your friends.

‘After a long old day glad to be home and put my feet up and have a well-deserved glass of wine.’

Mr Ismail was attacked by Simeon Evans, 30, and Jack Gargham, 26, after he left a nightclub at 6am on January 26 last year.

The group began arguing with him over a taxi, Birmingham Crown Court heard.

He was chased and took off his belt to protect himself, but Evans grabbed it and hit him with it. The tip of the belt caught him in his left eye, leaving it permanently blinded.

Gargham also began raining down heavy blows. While the victim was on the ground Sheldon joined in.

This woman is the very definition of human scum, and how she managed to avoid jail is completely beyond any comprehension.