Feminists vandalize fraternity over refusal to be admitted 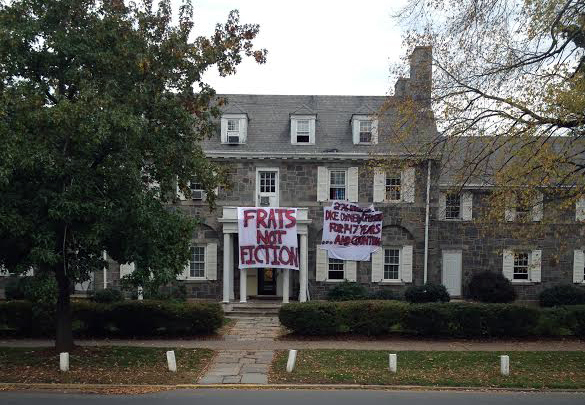 Fraternity members have fought back against the feminists with a banner of their own.

Universities have a long tradition of separate fraternities and sororities for male and female students. The radical feminists want to change all of that. And they’re going to break the law and use vandalization to make sure it happens.[2]

On the night of Thursday, May 21 as numerous alumni and families of soon-to-be graduates crowded the Wesleyan University campus, a student feminist group vandalized the house and lawn of Delta Kappa Epsilon (DKE) fraternity to publicly protest the chapter’s existence on campus.

After a slew of sexual assault scandals involving Greek life, Wesleyan administration ordered all fraternities to admit women as members. If they refused, they would get kicked out of their residence and lose their right to function as a student organization.

“With equity and inclusion in mind,” Wesleyan President Michael Roth wrote in an email to the student body in September 2014. “Women as well as men must be full members and well-represented in the body and leadership of the organization.”

After months of attempted negotiation with the administration, DKE filed a lawsuit against the university for gender discrimination. The crux of their argument was that the university preaches, but doesn’t always execute, tolerance for all students and organizations.

Members of the fraternity woke up the next morning to find silly string all over the yard, hundreds of feminist pamphlets strewn everywhere, and a banner hung on their front porch that said, “Feminists, not fiction.”

College feminists are on a rampage to accuse men of rape on campuses across the country, despite the fact  there is no rape epidemic and the facts show that women also rape men. Let’s hope the judge has some common sense and stops the abuse by radical feminists.