While racial tensions are continuously stoked by race hustlers like Al Sharpton and even our own president, it’s unsurprising to see a small element of blacks declare that it is “self-defense” to murder police officers before they have the chance to do similarly. In a post by Weaselzippers[1]: 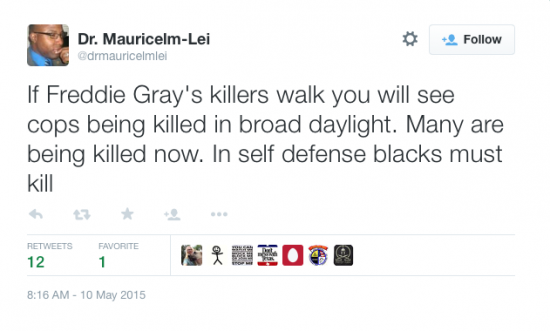 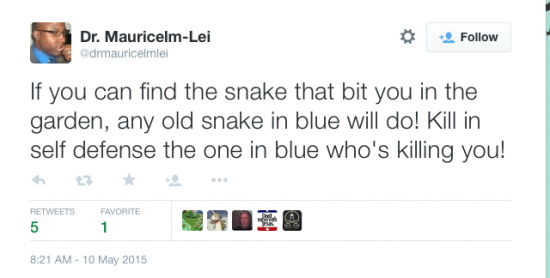 Dr. Mauricelm-Lei Millere claims to be a psychotherapist. One wonders how he could ever have gotten a license, if true. Maybe his first patient should be himself. He claims to have been the founder of the illness Manic Aggression Personality Disorder:[4]

Manic Aggression Personality Disorder – is a mental illness merely affecting Africans, Africans born in America,or the Pan-African Community. [Dr. Mauricelm-Lei Millere] is credited as founder of illness or disorder. Millere attributes the violence within the African American community to the enslavement of the black race. He states, “This psycho-socio illusion, or personality disorder (or M.A.P.D.), is an isolated illness pertaining to the African race entirely – mimics [bipolar] and [schizophrenic] personality [1]. Whether he is in America, Africa, the Diaspora, or abroad he suffers psychologically and socially from the evils of this [[neurotic]] syndrome for two reasons. Primarily, he suffers because the European (white) racist delusion of slavery encountered him as an animal. The term used is chattel (human cattle). Secondly, the culprit race, responsible for his inquisition refuse to take responsibility for the system of slavery and its damages, which is [[psychological]] or [[sociological]] in nature, they caused. MAPD: an illness isolated, particularly, to Africans, “Africans born in America”, or black communities, experiencing mental, behavioral, or social illness due to slavery and/or post-traumatic slave experiences. “MAP” causes blacks to, spontaneously, inflict violence on an oppressor or suspected threat. “MAP” can be witnessed in black communities, especially in America, but is becoming common against “whites” and “so-called Jews,

Race relations in America are coming off the rails. Though this is but one man’s twisted opinion, it only serves as an extreme incarnation of a rabid victim mentality found within much of the black community.

Unfortunately, as our nation is being torn apart, our president and his radicalized Department of Justice appear all-too willing to gleefully exploit this rift.