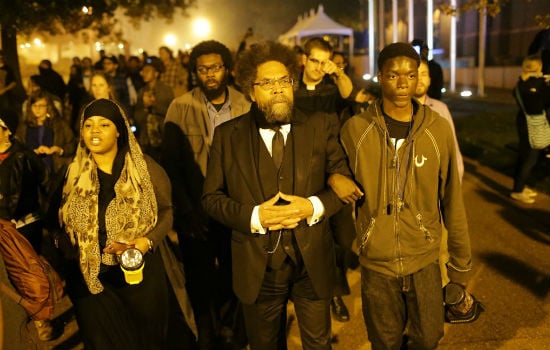 [1]Joshua Williams, featured above arm in arm with black activist professor Cornel West, has confessed to setting a QuikTrip on fire last Wednesday during protests of the death of Antonio Martin. Martin was fatally shot by police after he reputedly pointed a gun at them.  Williams had been hailed by the fawning mainstream media as a crusader for peace and reform. [2]

According to St. Louis Today[3],

Williams has been arrested at least twice during Ferguson-related protests for unlawful assembly as well as refusal to disperse.

Police say Williams used lighter fluid to set fires inside and outside the QuikTrip early Wednesday. He was charged with arson in the first degree, a felony. He is also charged with felony burglary and misdemeanor stealing for allegedly taking a lighter, gum and money from the store.

Williams has been quoted as an advocate for peaceful protests.

An MSNBC profile of Williams in September quoted him as saying, “We have to come together as one and show them we can be peaceful, that we can do this. If not, they’re going to just want us to act up so (police) can pull out their toys on us again.”

Later, he continued: “I learned that we have to stand up and that you can’t get nowhere with violence but you can always move people without it.”

How is stealing gum and money – much less arson – legitimate protest? It’s anarchy. It is irresponsible of the mainstream media to continue propping up anyone who protests the police without looking into their background first. Otherwise, Americans are going to get the message that crime doesn’t matter as long as you harbor certain viewpoints. Propping up Williams and his fellow crooks isn’t helping them to live productive, moral lives, nor is it helping innocent store owners. Hopefully, Williams will be prosecuted to the full extent of the law, or this will mark a further descent into anarchy.