FIGHT: Old Man Defends Himself From 4 Attackers With Amazing Timing

A street fight breaks out between an older man and 4 attackers. As the attackers make their way towards him, he prepares to defend himself. Despite Police Officers who stand guard nearby (doing…nothing at all), they break through a couple rope barriers and a couple Police Officers (again, who do nothing), to get to the man who is taunting them on the other side. They attack! …and then he does THIS!

That was no Shaolin kind of action….but that old man sure did hold his own! 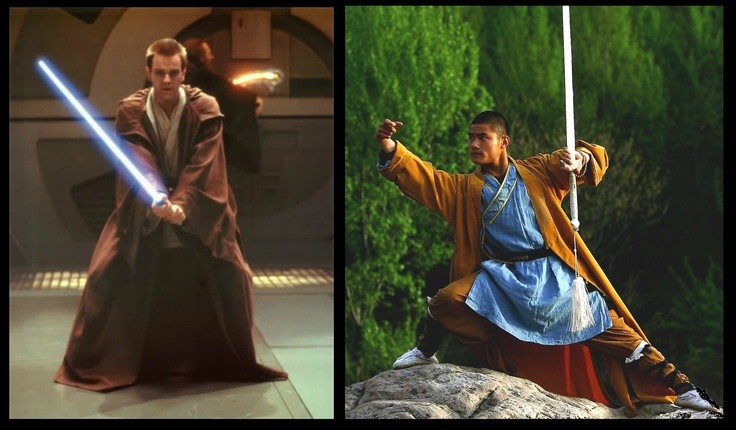 Speaking of Shaolin, did you know…if it weren’t for Shaolin, one of the world’s most monumental blockbuster movie series of all time…might have not come to be?[2]

According to George Lucas himself, the Shaolin monks were one of the key inspirations for the Jedi Knights, and the Star Wars films clearly owe a large debt to the real Shaolin monks.

Legendary Shaolin monks attributed their superhuman physical prowess to the control and manipulation of Chi, much like the Jedi and the Force. The Jedi’s lightsaber fighting style strongly resembles the acrobatic techniques used by the monks when wielding their famous staffs or double-edged swords. Even the Jedi’s belief in semi-pacifism (only using force when absolutely necessary), abstinence from earthly pleasures, and emotional detachment mirror Buddhist beliefs.There are also strong similarities between the Jedi Order’s backstory and the Shaolin Temple’s history.

The power struggle between the Jedi Order and Emperor Palpatine resembles Shaolin’s conflict with the Qing Dynasty emperors.

In Revenge of the Sith, Palpatine orders Anakin Skywalker to attack the Jedi Temple and slaughter the younglings training there. Shaolin experienced a similar fate when the Qing emperor ordered the destruction of the temple and the massacre of its inhabitants, including the children.

Do you see any Jedi/Sith similarities to this Shaolin demonstration? (Light Saber Edited In, For Special Effect)

Now this guy, definitely put the previous fighters to shame!