What do you get when you have a workplace filled with huge egos? Sometimes, these competing egos help make everybody better. More often than not, however, it leads to tensions. Reportedly, Fox News is dealing with such tensions as Megyn Kelly and Bill O’Reilly are rumored to be feuding- and Kelly’s recent subtle dig at O’Reilly appears to substantiate that.[1] 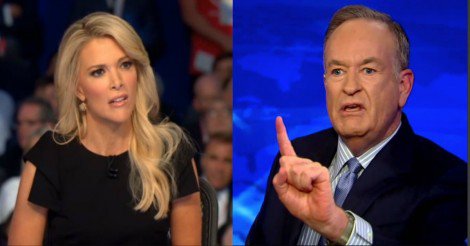 For many months, Fox News[3] and GOP presidential hopeful Donald Trump[4] have been at each other’s throats. Trump has claimed that Fox News personality Megyn Kelly hasn’t been fair to him, and Fox has said that Trump’s accusations are baseless[5].

New York Magazine[6] reported that this little spat may be causing some further complications within the Fox News network. Reportedly Megyn Kelly and Bill O’Reilly are at each other’s throats over Trump and Kelly’s increasing popularity.

Despite angering many people with her treatment of Trump[7], Kelly’s popularity in Republican circles has actually grown, and she is now at the center of attention.

This doesn’t make O’Reilly[8], who used to be the one that stirred controversy and got the ratings, very happy, in part because he apparently believes that he gave Kelly her shot and, now that she is a star, she has been trying to overshadow him.

“If you’re not live at night — because the show before me and the show after me are taped — you lose a lot,” Kelly stated when she appeared on Stephen Colbert’s late-night show after the Super Bowl.

That was a veiled shot at O’Reilly[9], whose show is taped three hours before it goes on the air. Unsurprisingly, it only angered him further.

Megyn Kelly does a serviceable job. On her best days, she is merely adequate. Of course, many are likely to disagree with my assessment, and that is fine. For me, she has always appeared rather dull and lacking in political insight and the ability to facilitate discussions centered on complex issues.

Not terrible- but she is far from the megastar she evidently sees herself as.

On the other hand, Bill O’Reilly’s ego is legendary and infamous. Putting these two together in a situation appears like putting gasoline and a lit match together.

It’s not surprising to discover that there are tensions at Fox News. One of them may end up having to go and I’m not bashful about admitting that I sincerely hope Ms. Kelly is offered the chance to bring her humdrum brand of journalism to another outlet.