These three young women are liars. They started a fight[2], attacked a young white woman and then lied about the entire thing to 911. No one could be more deserving of being charged with a crime than these three women who apparently have no problem lying to the authorities. When you scream racism and brutality but the multiple videos of the incident show that you made the whole thing up and are in fact the attackers yourselves, you should have to pay the price for that. And they are.

Three black female college students who claimed to be victims of an assault by a group of white men and women have been charged themselves.

The women, all 20 years old, claimed they were attacked early on the morning of Jan. 30 while riding a bus. They claimed that they were called racial slurs and were physically attacked while bystanders looked on.

Investigators say a review of multiple videos of the incident showed no evidence the women were victims of a crime or subjected to racial slurs. In fact, police said the women were the aggressors, assaulting a 19-year-old white woman.

Police said surveillance and cellphone video, as well as eyewitness testimony, contradicted the women’s account. The white men Agudio, Burwell and Briggs claimed assaulted them were actually trying to break up the fight.

“I especially want to point out that what happened on the bus was not a ‘hate crime,'” University Police Chief Frank Wiley said in a statement, according to the Albany Times-Union.

See Hillary’s misinformed tweet about the false claims below: 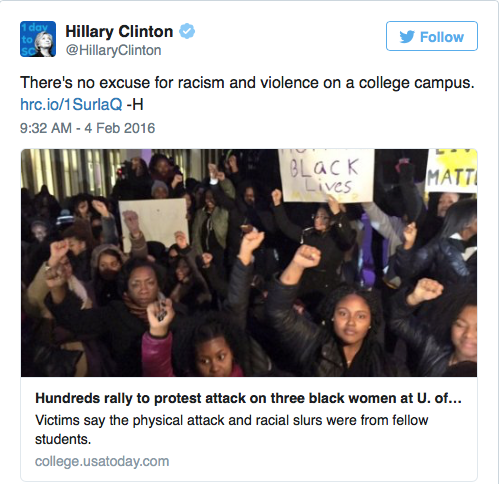 Liars are going to be found out. And lies don’t help the cause of ending racism. Being a racist thug does not help to stop other racist thugs. Why these three young women whose entire lives are ahead of them, would beat someone up because of her color then lie about it, we will never know. But obviously there are three women who need some real life consequences to learn that this nonsense will not be tolerated by their victims or the authorities. Hey ladies, how’s it feel to be under arrest when you should be in class?