Gender and Migration… really? What the hell is a “Gender & Migration Consultant” from Finland doing working for the city of Boston?[1] 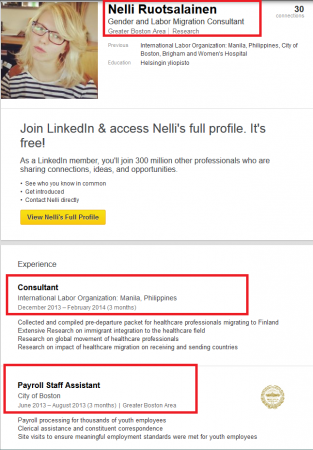 What the hell is a “Gender & Migration Consultant” from Finland doing working for the city of Boston?

Don’t we have enough Barnard graduates with useless degrees born in America who can do this job?

Furthermore, what about being a Gender and Migration Consultant makes her an expert in communications or fit to work with children/families on behalf of the city of Boston?

Mayor Martin J. Walsh has fired a 25-year-old city youth worker after learning the Roxbury woman was among 11 protesters who chained themselves to 1,200-pound, concrete-filled barrels in Milton on Thursday, snarling morning rush-hour traffic and stalling at least two ambulances, the Herald has learned.

Nelli Ruotsalainen, a part-time youth communication specialist for the Boston Centers for Youth and Families, was noncooperative and “pled the Fifth” at her City Hall hearing yesterday, after which a Labor Relations committee recommended she be terminated, according to city officials.

Walsh said he fully supports the right to demonstrate but these protesters crossed the line — and endangered and disrupted people’s lives. The mayor said he was particularly upset that the protesters jeopardized the life of an 83-year-old car crash victim whose ambulance had to be rerouted from Boston Medical Center to a Brockton hospital.

“You can’t put people in harm’s way like that,” he said.

Public safety is most important. You are guest in this country, and although you have the irght to freeedom of speech, you do not have the right to put others lives in danger.