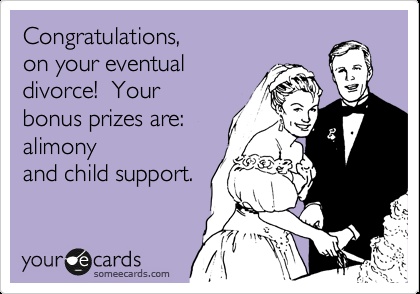 [1]A bill has passed out of both the House and Senate in Florida that would greatly reform the unfair and outdated child custody and alimony laws. SB 668[2] would make the default when parents split up nearly equal timesharing of children. It is a commonplace reform that is gradually being implemented around the country, to reflect the reality that children need both parents and most women work outside of the home. It would also put more limitations on alimony, by taking significant consideration of the length of the marriage and both divorcees’ incomes. SB 668 passed both houses by wide margins, and polls show 70 percent of the public support the reforms.

Unfortunately, powerful special interests, like the Family Law Section of the Florida Bar, are lobbying Florida Governor Rick Scott (R) hard not to sign it — even though family law attorneys themselves generally support it. He has 15 days to sign the bill, and there is a concern he is just sitting on it to eventually veto it.

One woman told me she was ordered to pay lifetime alimony to her ex-husband based on a 14-year-long marriage. Many couples who were only married for 10 years are now in their 20th year of alimony. Some didn’t have any children, or if there are any, they’re often grown.

The current unfair alimony law is starting to hurt women as much as men. Approximately 50 percent of students in graduate schools are women, which could mean eventually 50 percent of alimony payers will be women.

Rose Carbone, who has no children of her own, got married when she was 51. Her husband had three boys with his ex-wife, and was initially ordered to pay $90,000 year plus an extra $300 per month in rehabilitative alimony — which his ex never used — unfairly based on his highest year of earnings. Even though he is now around age 60, and his boys are all well into their 20s, he is still required to pay $5,200 per month and maintain a $1 million life insurance policy. When he tried to object, he was warned to back off or Carbone’s income would be taken into consideration as well. He spent $20,000 in legal costs just getting the reduction. Carbone is also around age 60 and says they both have no way to retire.

Carbone voted for Hillary Clinton and calls herself “a proud Democrat who has never voted for a Republican.” But she says this isn’t a partisan issue, it’s about equality. “You can’t empower women through entitlement,” she told me. “These laws aren’t family-friendly. They call us second wives, but we’re not second wives to anyone. These laws discourage families, they use the children as ammunition.”

The League of Women Voters is supposed to be a nonpartisan, civil organization. But in a letter to the Florida legislature last year, the organization said no new laws are necessary, the existing ones have worked for 200 years. Carbone said that’s like saying slavery worked. That kind of mindset would have prevented women from getting the right to vote.

Ultimately, however, she says it will require a change in mindset, comparing it to President Eisenhower’s remarks on civil rights legislation, “I don’t believe you can change the hearts of men with laws or decisions or anything else.”

Lori Barkus, a family law attorney in Florida, explained how the child custody reform half of the bill would work:

“The timesharing portion would provide judges with a starting point that parents are equally loving and capable. A judge then has full discretion to decide a parenting plan that is in the best interest of the child and that particular family. This would be a giant step towards increasing fathers’ participation in their children’s lives post divorce.”

Karen Wood, a licensed mental health professional who has worked with the Florida family court system for over 20 years, relayed to me why this bill is so important for children:

“I have worked with an uncountable number of parents and children who have been mentally damaged by the time sharing portion of their parenting plans. Children of divorced parents oftentimes spend their childhoods in therapy struggling with the issues of their parents. These children are often misdiagnosed with disorders such as ADHD due to the behavioral issues that manifest as a result of timeshare issues. These same children often develop anxiety and depression as a way to cope with a life of inconsistency. A parenting plan with a consistent equal shared parenting schedule provides both the parents and the children with the ability to have a predictable schedule, the ability to work and the experience of having both parents parenting.”

Shared parenting is not a gender issue, it is a mental health issue.

Barkus has seen the devastation of families caused by the unfair laws firsthand as a family law attorney. She says, “The bill would reduce the never-ending court battles that have become sadly common in our society. The vague and outdated current law does nothing but promote litigation and produces inconsistent results.”

Let’s hope Governor Scott does the right thing and stands up to the bullying by the Family Law Section. The left-leaning do-gooders who run it would rather keep the cruel system in place which has mostly punished men and rewarded women at the expense of children — but they cannot get away with it forever since women are increasingly taking the brunt of it.