Because snuggling up with a poisonous animal is always a good idea, right? This guy must be a liberal to think this is a good idea. 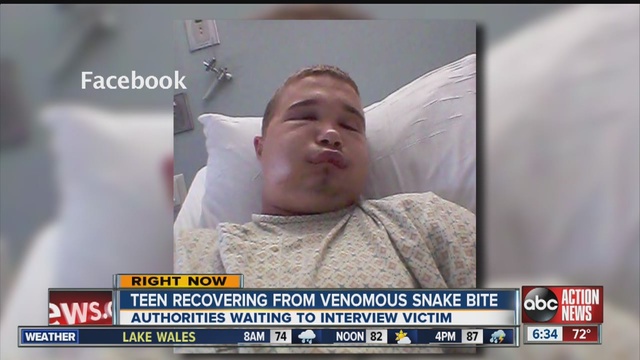 A Florida teenager is recovering after being bitten in the face by a water moccasin.

The bite happened last Saturday, according to investigators with Florida Fish and Wildlife, two days after Austin Hatfield, 18, captured it in his girlfriend’s yard in Wimauma.

One of Hatfield’s friends, Jason Belcher, was there when it happened. Belcher said the snake was initially in a pillow case.

“He took it out, put it on his chest and it was acting funny, and it jumped up and got him,” he said.

The snake lunged at Hatfield, biting him on his mouth.

“He ripped it off his face, threw it on the ground and he started swelling up immediately,” Belcher said. “It was pretty frightening. We’ve done a lot of stuff together. This is the one thing that scared me the most.”

Hatfield was in critical condition, but was later upgraded to good condition, a Tampa General Hospital spokesperson said.

“[Doctors] said that they had to ventilate him so he could breathe because of the swelling. And that was the first thing [I thought] — is he going to make it?” said Gina Bailey, the mother of Hatfield’s girlfriend. “I was very worried. I know that these snakes are very, very poisonous.”

Hatfield did not have a permit to possess the venomous reptile, and he captured the Water moccasin illegally, according to FWC spokesperson Officer Baryl Martin. “People without the experience shouldn’t be handling these types of animals.”

I guess a permit comes with special training that teaches you NOT to snuggle up with a venomous water moccasin.