When it comes to boxing, it doesn’t get better than former champ Evander Holyfield.  He knows boxing and has some very interesting comments about the Mayweather – Pacquiao fight that occurred last weekend. [1] 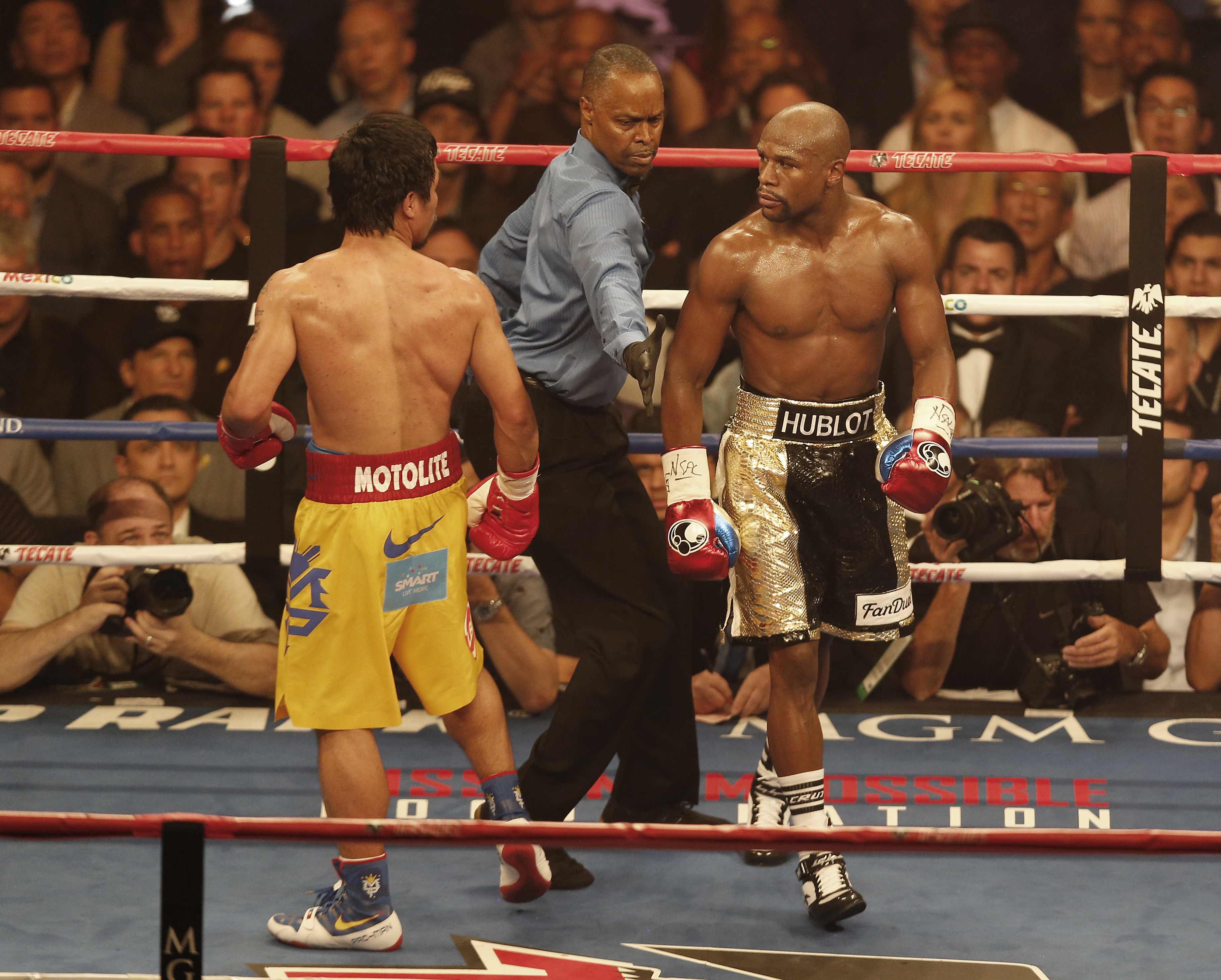 The Floyd Mayweather and Manny Pacquiao fight on May 2, 2015 in Las Vegas. (Photo by Jed Jacobsohn/The Players Tribune)

“It was supposed to be boxing’s big moment. I was hoping Mayweather vs. Pacquiao would start a renaissance and help bring boxing back as a major sport in America. But with the whole world watching, instead of The Fight of the Century, we got a fight that highlighted everything that’swrong with boxing. You can’t blame Floyd Mayweather, and you can’t blame Manny Pacquiao. They’re all-time greats who were just out there fighting like they always have.

The only one you can blame is boxing itself.

I’ve attended the three biggest fights of the year so far: Deontay Wilder vs. Bermane Stiverne, Wladimir Klitschko vs. Bryant Jennings, and now Mayweather vs. Pacquiao. And you know what I’ve seen?

In 36 total rounds, I saw zero knockdowns. I saw a lot of holding and hugging, and a lot of running. I saw three, 12-round unanimous decisions.

What I didn’t see were punches being thrown and landed. No fighter in any of the three fights was ever threatened or even in trouble. I didn’t even see a fighter with a cut or a bruise after the fight. Everyone was just playing defense, trying not to get hit.

The answer is, you can’t. But that’s what boxing has done to itself with how it’s scoring these fights today and how the action is being evaluated. Fans are expecting engagement, aggression and action, but unfortunately, the system is not set up to promote and support that type of activity anymore. In fact, boxing is not only allowing this less aggressive brand of fighting, it’s supporting it by rewarding less aggressive fighters with decisions.

I don’t blame Mayweather. He might be the smartest fighter alive. The judges today are giving decisions to fighters who use defensive tactics, and he knows that. That’s why he’s now 48-0. He’s boxing according to the way judges are scoring the fights. He plays the system and he wins. That’s just another thing that makes him one of the all-time greats in this sport. But this is what boxing has become, I’m sad to say. There was a time when fighters would get points for being aggressive and engaging the other fighter. There was also a time when fighters would get penalized for hugging and holding, and avoiding the opponent altogether. But that’s just not how boxing is anymore and that’s not how referees call the fights, either.

That’s not to say referees aren’t giving out penalties — they’re just not giving them out as often as they should. Even Klitschko, the world heavyweight champion who hasn’t lost in 11 years, was penalized a full point after multiple warnings for holding against Jennings. And he won that fight. His defensive approach worked. So it’s not just Mayweather using this strategy. It’s an issue spread throughout the sport.

One of the most famous fights in the history of boxing is Muhammad Ali vs. George Foreman — theRumble in the Jungle — where Ali used the rope-a-dope technique to win the fight. Ali sat on the ropes and played defense the entire fight, absorbing body blows and letting Foreman be the aggressor. But he didn’t do it to win a decision (he would have lost if it went to a decision, and he knew that). He did it to weaken the bigger, stronger Foreman so he could knock him out in the later rounds.

Boxing isn’t broken. Everything that was wrong with Mayweather vs. Pacquiao — which I feel was a good fight, just not The Fight of the Century, as it was hyped — can be fixed with a few simple changes.

First off, we need to change how referees officiate these matches.

Referees need to be more aggressive in enforcing engagement. If referees are told to hand down penalties for holding and not engaging the opponent — including early warnings, taking points away or in extreme cases, disqualifying fighters — guys will engage. That’s how the sport is refereed at the amateur level so why should it be any different at the highest levels? This is the simplest and easiest solution to implement: strictly enforce the rules and hold referees accountable.

Secondly, we need to change how judges are scoring the rounds. There are four things judges look for when scoring a fight:

2. Ring generalship (controlling the action and pace of the fight)

After evaluating these four criteria, the judges award a 10 to the fighter who won the round and a 9 to the fighter who lost. Points are deducted for knockdowns, holding, low blows and other penalties as well, but it’s that initial 10-9 scoring that’s the biggest issue.

Judges hand out scores and decide who won the round without giving any breakdown or reasoning for how they arrived at their decision — because they’re not required to. We’re just supposed to take their word for it and live with the decision. They don’t even have access to round-by-round statistics like punches thrown or punches landed. They depend solely on what they can see from their ringside seats. So if a fighter has his back to a judge and he lands a punch, but the judge can’t see it, it won’t be counted in that judge’s scoring of the round.

How can judges accurately score the round under these circumstances? It’s as subjective as any system in sports, and even when a decision gets called into question, the judges are rarely held accountable. The scoring system in boxing would benefit from implementing new technology that would provide the judges with real-time statistics after each round to use in their scoring. Why not give judges any and all information possible to accurately score the round?

Additionally, judges should have to present a scorecard for each round laying out how they scored that round according the the four major criteria. This would ensure that judges are scoring based on all fourcriteria, not just awarding the round based on one aspect, such as defense. Not only would this make the decisions more transparent, it would also make it easier for judges to give extra points for willingness to engage, and to take away points for lack of aggression and being passive. If fighters know they’ll get points for being aggressive, believe me, guys are going to fight. You’ll see guys step into the ring ready to fight from bell to bell.

As someone that watched the fight, I cannot tell you how disappointed I was with it.  With news that Pacquiao suffered a shoulder injury in the weeks previous to the fight that has since been treated with surgery, it sounds like a rematch between the two is right around the corner.  But hey, when you’re making 160 million a fight, why wouldn’t you do it again?