This election process is a struggle[2]. I can’t possibly be the only one who feels completely displaced and discouraged by this election. At some point the plethora of information condemning Secretary of State and Democratic nominee Hillary Clinton is just overwhelming. And yet we just don’t hear about it anywhere, but here.

And this one has to be one of the worst. The former president of Haiti recently spoke out against Hillary Clinton. In the midst of the Haitian earthquake tragedies Hillary Clinton managed to majorly benefit. A recent release of emails show how Hillary Clinton gave special access and attention to “friends of Bill Clinton.”

I know what you are thinking… Bill Clinton has friends??? Friends is just a nice way of saying people who can help him.

The former president Bernard Sansaricq held a press conference in which he condemned Hillary. “Shame on Hillary Clinton and her foundation,” he passionately stated, “for even thinking about profiting off of the humanitarian crisis in my country.” 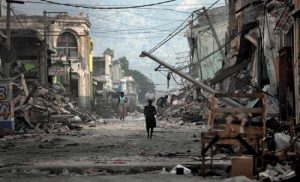 Isn’t that just exactly a hallmark of her career though? Using tragedy, war and turmoil to her benefit. Perks of being in power, I guess. But the former president’s outrage doesn’t end there. He continued, “As my people were dying, Hillary was abusing her position as Secretary of State and prioritizing access to what the State Department viewed as a ‘gold rush’ for her wealthy donors in exchange for exorbitant speaking fees and large donations to the Clinton Foundation.”

As president Hillary Clinton will have countless opportunities to serve individuals and nations in the wake of tragedy, Hillary has made it perfectly clear how she would respond in such a crisis. She will serve those who she is “friends” with and owes favors. And the people dying in the street will go unnoticed.

The former president made it clear how he felt about Clinton. She is, at best, corrupt. And, more likely, an egotistical and evil woman who is desperate for power.

And that, ladies and gentleman, is our Democratic nominee.