In a bittersweet tale of loss, former NBA player Vin Baker now finds himself as a barista at Starbucks, but for unlike during his playing days, clean and sober and living a more-responsible life. The Daily Mail reports:[1] 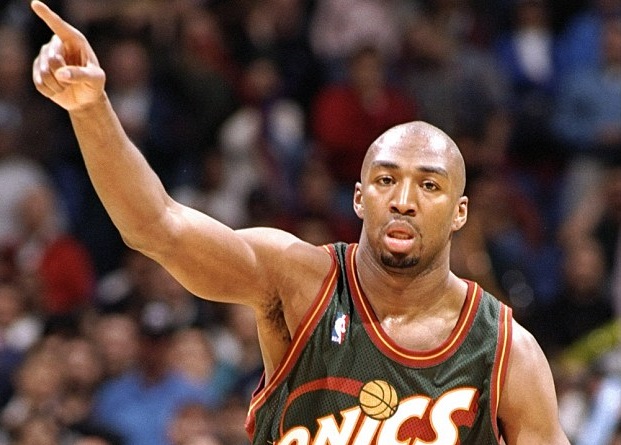 He earned a staggering $100million during his 13-year NBA career.

But now, Vin Baker is working at Starbucks in North Kingstown, Rhode Island, it has emerged.

The four-time All-Star, who enjoyed a glittering career before descending into alcoholism and losing his fortune, is currently serving as a barista – but is training to manage one of the chain’s stores.

He thanks Starbucks CEO and chairman Howard Shultz – the owner of the Seattle SuperSonics (now, the Oklahoma City Thunder) when Baker played for them – for the ‘excellent’ opportunity.

‘In this company there are opportunities for everyone. I have an excellent situation here at Starbucks and the people are wonderful,’ six-foot-11 Baker told the Rhode Island Providence Journal.

‘I love North Kingstown. It reminds me of my hometown, so it’s comfortable. I like this community.’

The father of four added: ‘When you learn lessons in life, no matter what level you’re at financially, the important part to realize is it could happen. I was an alcoholic, I lost a fortune.

‘I had a great talent and lost it. For the people on the outside looking in, they’re like “Wow”. For me, I’m 43 and I have four kids. I have to pick up the pieces. I’m [also] a minister in my father’s church.’

Born in 1971, Baker played for his high school in Connecticut, before accepting a scholarship from the Hartford Hawks and later becoming part of the North Atlantic Conference All-Rookie Team.

He went on to enjoy a successful career on the court, playing for the Milwaukee Bucks and Seattle SuperSonics before being traded to the Boston Celtics. In 2000, he won Olympic gold.

During his time with the Celtics, Baker was forced to admit he was a recovering alcoholic after his weight ballooned, his game performance worsened and his coach smelled alcohol on him.

According to the Boston Globe, the team’s coach Jim O’Brien confronted Baker about his alcohol habits after smelling it on him. The star was suspended from the Celtics, and later released.

He went on to play for the New York Knicks, the Houston Rockets, the Los Angeles Clippers and the Minnesota Timberwolves. He was eventually released from the Timberwolves in November 2006.

Toward the end of his career, Baker, now 43, wiped out nearly his entire $100million of earnings through his alcohol dependence and what the Journal describes as a ‘series of financial missteps’.

These included a failed restaurant and financially detrimental partnerships with others.

In 2013, he told the New York Daily News that he had been leading a double life as an alcoholic.

Speaking to the Journal, Baker said every day as a recovering alcoholic is a challenge.

But he said he was proud of his will to recover and provide for his wife and their family – and hopes it inspires others.

‘I have to take the story and show that you can bounce back. If I use my notoriety in the right way, most people will appreciate that this guy is just trying to bounce back in his life,’ he said.

He added that young NBA stars, who are getting paid millions, should surround themselves with the people they trust the most – and monitor ‘every dime’ that goes out of their bank accounts.

It’s too bad that Baker finds himself in this position. However, it seems clear that though he is no longer rich, he continues to overcome the problems that produced hardship for the former star.