After it was alleged that Trump had walked into a room where a group of pageant contestants were either completely or half naked, former Miss California in 2009 felt as though she had to say something.

And boy did she. 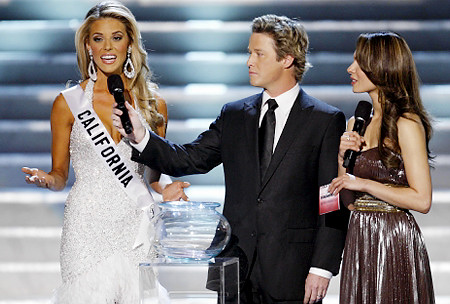 Tasha Dixon, Miss Arizona 2001, alleged that Donald Trump had “strolled right in” to the changing room that the pageant contestants used for dress rehearsal. She also claimed that the people in charge of the whole affair had told her and the other contestants to “go fawn all over him.”

Our first introduction to him was when we were at the dress rehearsal and half naked changing into our bikinis. To have the owner come waltzing in, when we’re naked, or half naked, in a very physically vulnerable position and then to have the pressure of the people that worked for him telling us to go fawn all over him, go walk up to him, talk to him, get his attention.”

She also claims that Trump owned the pageant “to utilize his power to get around beautiful women.”

But Carrie Prejean Boller, Miss California 2009, rejects those claims, saying Trump “empowered” her as a woman.

“To paint Mr. Trump as someone who would purposely walk into a women’s dressing room and ask women to come impress him is the most disgusting accusation so far. Mr. Trump has empowered me as a woman, has given me career opportunities and defended me during my reign as Miss California USA.”

You might recall that Prejean came under heavy fire from the left after saying that she believed that marriage should be between a man and a woman.

In May, Western Journalism[2] reported that Prejean would not cooperate with the New York Times in smearing Trump.

“… when they started this whole campaign against him, several reporters had reached out to me and asked to interview me, and I said that I really had nothing to say to them, and they weren’t going to get out anything out of me negatively about Donald Trump, and they weren’t really happy with that. So I basically wouldn’t give them a story, and now they came out with their own version of it, and took something out of my book and just totally twisted it and made it so negative. … I have nothing but positive things to say about Donald Trump.”

She says that without a doubt, Trump has helped a lot of women and they need their stories told to counteract the parasites coming out of the woodwork to try to destroy him personally and politically.

Do you think Trump is the ruthless pervert Dixon is painting him to be, or the kindhearted, generous man that Prejean wants us to believe?