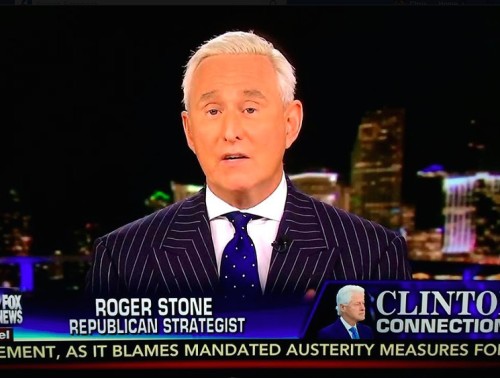 It’s been years since we had to put up with Bill Clinton in the White House. But the sordid stories of his sexual exploits [2]just never go away. Roger Stone has a book out that details parts of the sad history with women that is President Clinton. Read on to get a glimpse into our classy 42nd President.

Do Bill Clinton and Bill Cosby have more in common than just a first name?

Author Roger Stone (The Clintons’ War on Women, 2015) thinks so, explaining on last night’s Real Time with Bill Maher web-only Overtime segment why he thinks the former president “is a Cosby-type sexual predator.”

When Maher pointed out that Stone[3], a former Trump advisor, accuses Clinton of raping 27 women, one of the other panelists began to laugh out of view (it might have been David Spade). Stone says, however, there are many past victims whose names didn’t become publicly known.

While Maher argued semantics over whether some of the others actually accused Clinton of rape or mere sexual assault, he did concede that “no one is saying that he’s not a horndog.”

Stone says the point of his work is to show that Hillary “helped cover it up, she’s an enabler, that’s what the book’s about.”

“The Clintons are a little handsy,” Maher said.

Behind every great predator is a great enabler. We can only hope that Bill Clinton will not be back in the White House after November 2016, this time with a lot more time on his hands, or FOR his hands, as the case may be. The women of Capitol Hill just don’t need that. When voting for President, keep in mind the combined  histories of the candidate and her spouse. Do you want a return to the bad old days?