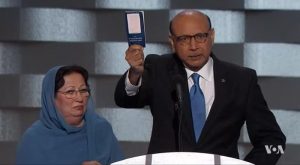 Earlier in the week a story appeared in the corrupt media that Khizr Khan was forced to cancel an appearance in Canada because his travel plans was being reviewed. Nowhere in the story was any information gi
ven as to who was reviewing his travel. Yet, the corrupt media machine put out the screaming headlines. Well, like a lot of stuff put out there by the mainstream media, the story turned out to be FAKE NEWS!

Mediaite[2] reports earlier this week, it was reported [3]that Gold Star father and vocal Donald Trump critic Khizr Khan had to cancel a speech in Canada because his “travel privileges are being reviewed.” Obviously, with Khan being Muslim and this news coinciding with the announcement of a new travel ban by the White House, there was quite a bit of concern.

However, the story immediately drew suspicion because Khan is an American citizen. So one would think there would be no such restriction on travel between the United States and Canada. Rosa Hwang, the Canadian news producer who first dropped the story, said she was passing on what had been sent by Ramsay Talks, the event where Khan was scheduled to speak.

According to the Washington Post,[4] it looks like there may be no truth behind this claim, which was apparently passed on the Ramsay Talks by Khan himself, who said he was not given any reason why his privileges were being reviewed.

Khizr Khan is a dishonest man desperate to grab his sixteenth minute of fame!