Louisiana Gov. Bobby Jindal (R) is doing what many politicians don’t do, he is taking time out of his campaign schedule to pray for the four American Marines who were killed by a radical Muslim[1]. 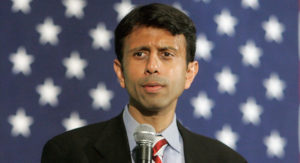 “Tonight I want to start by doing something a little different: I want to ask you to join me in prayer,” Jindal said at the first stop of his 99-county Iowa tour that just kicked off. “For those of you who haven’t seen the news, you may have seen four American heroes were slaughtered today—there’s no other description for it—and so I want to pray for them and their families, so if you wouldn’t mind bowing your heads and joining me in prayer before we start.”

Unfortunately, the country should be seeing President Barack Obama in front of the camera leading a prayer for these American heroes.