Iran is an enemy of the United States, though one would not believe that based on the cozy relationship the Obama Administration has cultivated in recent years with the despotic regime. After being held for four long years, an American Marine has finally found his way home from the hellish confinement he endured in Iran and now, he’s telling his tale.[1] 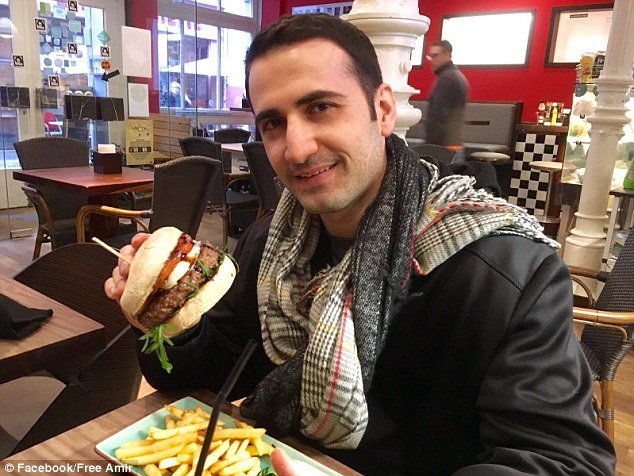 One of the four prisoners released by Iran earlier this week is revealing how he stayed strong despite being held for more than four years.

Amir Hekmati, a former Marine from Michigan, was arrested in August 2011 while in Iran to visit his dying grandmother, and was accused of being a spy for the CIA.

He was put in prison for the next four years, where his family claims he was tortured, drugged, kept in solitary confinement for a year and even at one point falsely told his own mother had died.

When asked on Tuesday how he managed to stay strong and make it through, Hekmati told reporters; ‘I didn’t want to let my fellow Marines down and the reputation of the Marine Corps, so I tried my best to keep my head up and withstand all the pressures that were put upon me, some of which were very inhumane and unjust.’

Hekmati went on to say during his press conference, held in Germany: ‘Hearing about some of my fellow Marines supporting me really gave me the strength to put up with over four years of some very difficult times that me and my family went through.’

He was still awaiting trial at the time, though he was no longer facing a death sentence.

Bloomberg View[3] spoke to his sister last May about what Hekmati had been enduring in Iran’s Evin prison, reporting: ‘The Marine’s torture was both physical and psychological. Amir’s feet were beaten with cables. His kidneys were shocked with a Taser.

‘He was drugged by his interrogators, who then forced him to suffer through withdrawal. Amir was also kept in solitary confinement for months on end and held in a cell so small for the first year of his imprisonment that he could not fully extend his legs.

‘He was allowed to walk outside his cell once a week.’

His sister also claimed: ‘His jailers took advantage of this and falsely told him his mother had been killed in a car accident.’

She said she had gotten this information from relatives who visited Hekmati and brief phone conversations they were allowed to have, which lasted five minutes.

Hekmati, 32, admitted on Tuesday he began to get nervous before boarding the plane to leave Iran, noting: ‘I was worried that maybe the Iranian side was going to make new demands at the last minute or that the deal wasn’t going to work out, so up until the last second we were all worried and concerned.’

He also said that his release from prison was like being ‘born again’ and that he and the three other prisoners celebrated as soon as they left Iranian airspace.

‘That’s when we knew we were leaving,’ said Hekmati.

‘As soon as we got out of Iranian air space, champagne bottles were popped.’

His family has been writing about his experience for the past few years on the blog Free Amir[4], and alleging horrific treatment.

They wrote at one point of his captivity: ‘Amir was forcibly given drugs, such as lithium, by prison officials. Officials would intentionally and abruptly stop this medication to induce a painful withdrawal response.’

They also claim he endured ‘mental torture’ and was ‘constantly shackled’ while he awaited trial on false charges.

‘It hurts us even more knowing that he is risking solitary confinement for choosing to starve himself in hope that action will finally be taken and his case will finally move forward and he will be one day closer to coming home and being reunited with our family,’ wrote his family.

Hekmati is now looking towards the future, and hoping to put his horrifying past behind him, saying: ‘I am well and I’m only going to get better, I hope. This has really been an exceptional time for me.’

He added: ‘I just feel truly blessed to see my government do so much for me and the other Americans.’

In exchange for four Iranian-American dual nationals, some of whom had been held for years, and a fifth American, Washington granted clemency to seven Iranians and withdrew arrest warrants for 14 others.

Asked about the way he had been treated in prison, Hekmati replied: ‘Well, it wasn’t good.’

Though it is terrific that he was released, this young man should have never been captured in the first place and his release should have come far sooner as a result of American strength- not from the pathetic bargaining conducted by the Obama regime.

Iran has a history of this kind of behavior; in 1979, they held dozens of Americans during President Carter’s weak reign.

The second Ronald Reagan was sworn-in, Iranians understood that the jig was up and released the Americans.

Iranians respond to power and exploit weakness. Which category does Obama fall into, do you think?