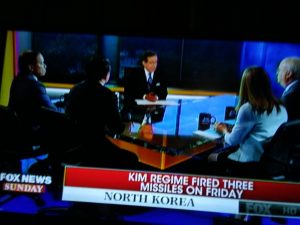 I cannot believe what Fox News Sunday did this morning by assembling the most anti-Trump discussion panel to date.

CNN is notorious for putting together 7 to 1 discussion panels with poor Jeffrey Lord as the lone spokesman on behalf of the Trump administration. he eventually got axed by CNN for his ability to make the other Liberal panelists look silly in their craven criticism of the president.

It’s FNS’s usual practice to put up a 2 on 2 panel to discuss news and political events on a Sunday morning.

From left to right, it’s a Conservative-Liberal-Conservative-Liberal that sits around a table with Chris Wallace serving as the moderator. However today it was Karl Rove, a noted anti-Trumper, a female correspondent for the Associated Press, aka a Liberal. But instead of putting up a more staunch Trump supporter, Fox invites a former staffer for Mitch McConnell! Juan Williams, no fan of the president completed the panel.

This is a step in the wrong direction for Fox who has chosen to emulate the CNN/MSNBC model of very biased discussion groups. Being fair and balanced apparently has gone out the window and it is very shameful to see.