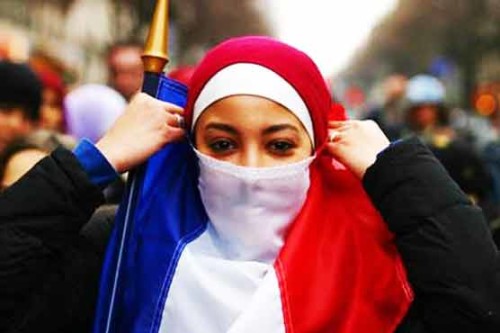 It is painfully obvious that gun control has not worked for France. There is at least one party [2]in France that recognizes that fact and is calling for the return of guns to citizens. Read on to see what Marine Le Pen had to say. Do you agree?

Marine La Pen, the leader of Front Nationale Party in France, called for the nation to “re-arm” itself in the wake of the Paris Islamist attacks on Friday.

** At least one of the Islamist killers in Paris entered Europe as a refugee from Syria.

ISIS took credit for the attacks.
The Islamist State said this was the “first of the storm.”

“
If there is one ‘winner’ from last night’s terrible events in Paris, it is France’s anti-EU, anti-immigration far-right wing Front Nationale party leader Marine Le Pen. Having already ascended to the lead in yet another poll ahead of France’s 2017 elections, Le Pen came out swinging this morning call for France to “re-arm itself,” stating that radical Islam must be “eradicated” from France. She further demanded that border controls be made “permanent” and binational Islamists must be depreived of their French passport.

*FAR RIGHT PARTY LEADER MARINE LE PEN COMMENTS IN TV SPEECH
*LE PEN SAYS FRANCE NEEDS TO CONTROL ITS BORDERS PERMANENTLY
*LE PEN CALLS FOR PERMANENT BORDER CONTROLS
*LE PEN CALLS FOR ‘ERADICATION’ OF RADICAL ISLAMISM IN FRANCE
*LE PEN: FRANCE IS ‘VULNERABLE’, ‘MUST RE-ARM ITSELF’
*LE PEN: FRENCH PEOPLE ARE NO LONGER SAFE
*LE PEN: BI-NATIONAL ISLAMISTS MUST DEPRIVED OF FRENCH PASSEPORT
Which is all fine if this was some extreme and unpopular party, but in fact…

It is way past time to rid Western nations of the scourge of radical Islam. When the primary goal of a group of immigrants is to destroy, to reduce to ash, and dominate their host nation. It is time for that nation to rise up and say “no more”. Is it too late for France? Will the French people understand that the only way to survive is to vote for people who will do what it takes to eliminate the Islamic cultural takeover and destroy their ability to commit terrorism?