While President Obama continues to dance around the issue of Islamic terrorism, Franklin Graham is out calling it what it is.

Take a look at what he said about the San Bernardino terror attacks[1]: 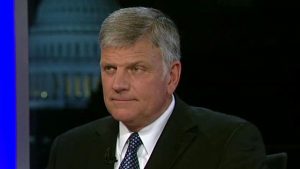 “It’s confirmed–San Bernardino shooter Syed Rizwan Farook was a devout Muslim. Friends say he had memorized the Koran. The headlines say Farook and his wife were a couple ‘bent on jihad,’” Graham began.

Graham pointed out the president’s response to these attacks, writing, “President Obama and his administration are trying to blame this incident on gun control when it was caused by hate-filled hearts intent on killing infidels in the name of Islam.”

He then noted a stark truth. “Take away the guns and this couple would’ve still slaughtered innocent civilians. Their apartment was a bomb-making factory! It’s happened in France and it’s happening here,” he wrote.

“ISIS has warned us that more attacks like this are going to follow,” Graham continued. “Next time it could be a mall or a school, but until our politicians understand and admit the threat of radical Islam we’re going to have more of these horrible acts of violence.”

Wow, sure wish Obama would talk like this when it comes to radical Islam. But, instead, he just continues to claim that Climate Change is the biggest threat to America.