The four men who prevented the France terror attack have been awarded[1] the Legion d’Honneur by President Hollande. It is France’s highest award for bravery… 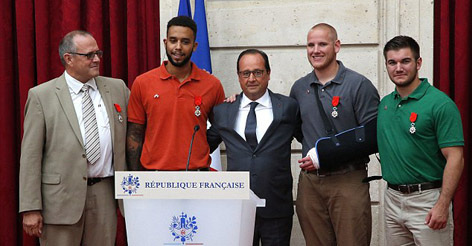 French President Francois Hollande, who pinned on their medals, praised the men for taking action in the face of terrorism.

The ceremony was held as the first heroic passenger who wrestled a machine gun from the terrorist was today revealed to be an American professor.

President Hollande pointed out that while soldiers, on that day they were just there as regular passengers, “You behaved as soldiers but also as responsible men.” You can watch the video below.