Whatever you thought of George W. Bush’s policies, you cannot deny that he is one of the most patriotic Presidents this nation has ever seen. Just looking at him you can tell be bleeds red, white and blue, and reveres this country.

On the other hand, you have spoiled brats like Kaepernick and the gaggle of pea-brains who have followed in his footsteps in disrespecting the National Anthem. They are openly hostile towards the country that has made them rich and treated them VERY well.

George Bush respectfully shut them up on 9/11, the terror attack on the Twin Towers that took place during his Presidency in 2001.

September 11th, 2016 occurred on a Sunday this year, which coincided with the beginning of the NFL football season.

While patriotic Americans were remembering the terror attacks in Benghazi and the Twin Towers that killed 3000 innocent Americans, football players were kneeling for our National Anthem, a sign of disrespect started by 49ers Quarterback Colin Kaepernick.

That’s where former-President and full-time American George W. Bush comes in. During the Giants vs. Cowboy’s game that took place at the AT&T Stadium, he and his wife, former-FLOTUS Laura Bush, joined two 9/11 first responders on the field to participate in the coin toss. During that time, he delivered a message and a prayer to the American people.

“Honored to be with David Norman and Robert Zajac of the New York Police Department today, first responders at Ground Zero fifteen years ago. For many of us, today may feel like any Football Sunday in America.

For David, Robert, first responders, and those who lost loved ones on 9/11, the memories of that dark day are fresh – and so is the pain. Laura and I hold the victims of 9/11 and their families in our hearts, and on this anniversary, we lift them up in our prayers.

May God bless all who mourn, and may He continue to bless and watch over our great land.”

While he did receive some negative feedback, including people upset because the Cowboys lost (unless you bet your entire life savings on their win, it doesn’t affect you so stop being a jerk about it), most of the comments were overwhelmingly positive. 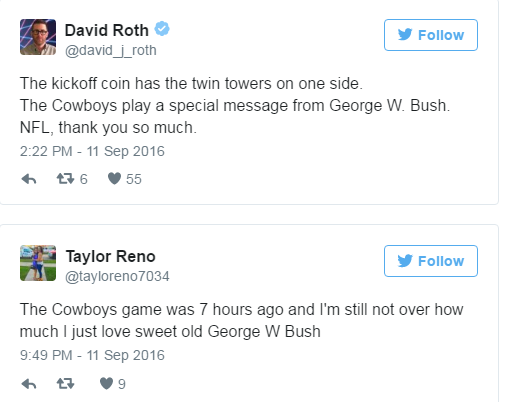 Do you miss George W. Bush? Let us know on our Facebook page[3]!