Well, this ain’t good.  Actually, it’s good for the American people, just not for Hillary Clinton. The prosecutor who is looking into Hillary’s email server has a reputation of taking down high ranking officials[1] when it comes to classified info… 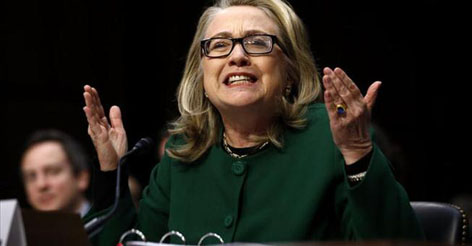 According to the Washington Post, the same prosecutor who took down General David Petraeus for improper possession of classified information is now looking into Hillary Clinton’s email server. Earlier this week, an intelligence Inspector General revealed Clinton did in fact have at least four pieces of top secret, classified information passed through and stored on her private email server.

As a reminder, Petraeus plead guilty to misdemeanor charges after keeping physical copies of classified information locked in a desk drawer at his house. He also shared them with his biographer and mistress Paula Broadwell. Prosecutors originally recommended felony charges.

Remember, the big issue with Petraeus is that he shared the info with his mistress. With Hillary, it’s about foreign governments getting their hands on it. That’s slightly different…