There’s not much the GOP can do to stop Obama if he wants to push through a replacement furing the lame duck session. Obama may wanna fight to boost his base before the mid terms. That’s why I think Obama is gonna nominate a black woman.

The Hill [1]reports Conservatives are warning President Obama against using a lame-duck session of Congress to push through Attorney General Eric Holder’s replacement, even as the White House signals its intention to fill the post quickly. 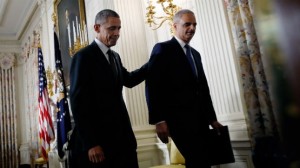 [2]Holder’s announcement that he will resign as the nation’s top law enforcement officer reverberated Thursday around Washington, where speculation has already begun to mount[3] about who might fill the Cabinet position.
Republican lawmakers quickly vowed that whomever Obama taps would be subject to intense scrutiny following an era when the GOP was often at odds with the Justice Department.

But even if, as many predict, Republicans reclaim control of the Senate in the approaching midterm elections, they would be largely powerless to block Democrats from using their current majority to confirm an attorney general before the new Congress is gaveled into session in January.

“Rather than rush a nominee through the Senate in a lame-duck session, I hope the president will now take his time to nominate a qualified individual who can start fresh relationships with Congress so that we can solve the problems facing our country,” said Iowa Sen. Chuck Grassley, ranking Republican on the Senate Judiciary Committee.

Grassley, who voted to confirm Holder in 2009, lamented that his tenure “was strained by his lack of respect for Congress, the American taxpayer and the laws on the books. “

Origianlly posted at The Last Tradition[5]