The Government Owns Over 623 Million Acres. Why Does It Need More?

Do you have enough? Insatiable ­– that would seem to be the word that best describes the appetite of some in Congress and their friends in the environmental community. 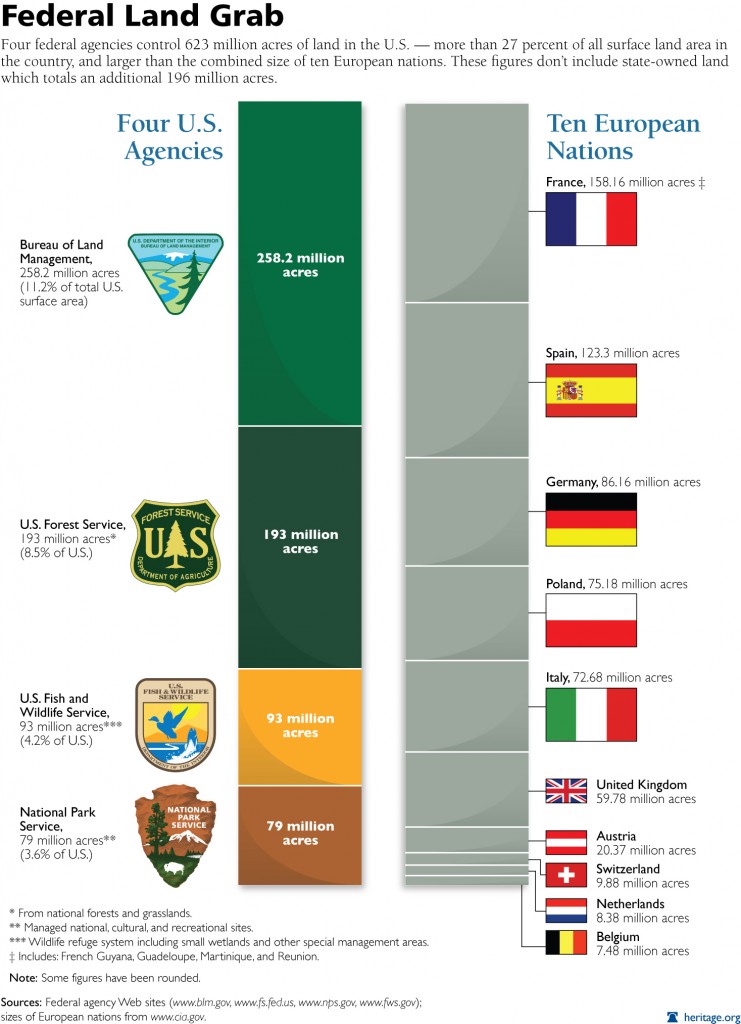 Insatiable ­– that would seem to be the word that best describes the appetite of some in Congress and their friends in the environmental community.

Congress has added over 450 pages to the defense authorization bill to designate wilderness, create new parks, designate Wild and Scenic Rivers and fund National Heritage areas – things that have nothing to do with national defense.

Yet for some, even this enormous helping of green pork is not enough. Several members of the House of Representatives are pushing for far more, seeking to gift the environmental community with a reauthorization of the Land and Water Conservation Fund. The LWCF was enacted in 1965 to take offshore energy development revenues and use them to buy private land and turn it into public parks.

After five decades of funding, the LWCF will expire in 2015. When one examines the scale and scope of federal lands and federal environmental designations, it is clear there is no longer any need to have a dedicated fund to feed the insatiable appetite of Washington.

Between the four largest landholding agencies (the Bureau of Land Management, the U.S. Forest Service, the U.S. Fish and Wildlife Service and the National Parks Service) the federal government owns over 623 million acres. To put that in perspective, it is larger than France, Spain, Germany, Poland, Italy, the United Kingdom, Austria, Switzerland and the Netherlands combined. The National Park Service – the smallest of the four major federal landholders – has in its portfolio:

Unsurprisingly, the Department of Interior, under which the NPS falls, has a huge maintenance backlog of between $13.5 billion and $20 billion for the land it already owns. In other words, NPS can’t manage what it already has.

So the question is: Do we really need a permanent pot of money to continually expand the federal footprint? If you are unsure as to the answer, below is more information about the immense holdings of other federal agencies. And, one should bear in mind that this does not include nearly 200 million acres of state owned lands. More importantly, this does not contemplate the federal environmental regulatory net cast over tens of millions of acres of private lands through laws like the Endangered Species Act and the Clean Water Act’s wetlands regulation.

The coalition promoting the LWCF states that “…the program has been chronically underfunded leading to a number of missed opportunities for investing in important areas. Now, a broad-based coalition of conservation, recreation, environment, business, historic and cultural organizations as well as many others are working together to secure full and dedicated funding of the LWCF. At the congressionally authorized level of $900 million annually…”

At time when we have $18 trillion in debt and 623 million acres already under federal control, having a special $900 million annual fund dedicated to purchasing yet more land is unnecessary.

We need less, not more, federal land. If there is any particular area lawmakers decide must be set aside, Congress can appropriate money for that purpose, just as it appropriates money for the military, veterans and other concerns more important than growing the vast federal estate.

The Land and Water Conservation Fund is done. It is time to stick a fork in it.

US Fish and Wildlife Service

150 million acres of land and water