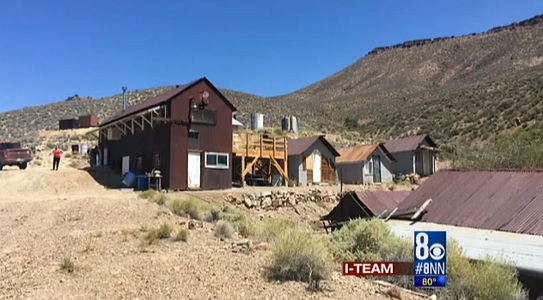 Private land overlooking the secret base at Area 51 has officially been taken from the owners and transferred to the United States Air Force.

Last month, the U.S. Air Force condemned the Groom Mine property when the family who owns it rejected a government buyout they felt was unjust.

The I-Team broke the story of the family’s fight with the government.

The Sheahan family, which until now owned the mine, knew they faced an uphill fight. They also expected the government would probably take the land through eminent domain even though the Sheahan’s owned it since Abe Lincoln was in the White House.

Now — literally with the stroke of a pen — a federal judge has turned the land over to the U.S. Air Force. The only part of the fight left for the Sheahan family now is compensation and what will happen to the equipment, buildings, even human remains, still at the site.

In the remote central Nevada desert, the Groom mine has been an island of private property surrounded by a vast government buffer zone. The buffer zone is patrolled by security troops to prevent people from getting a look at the secret test base at Groom Lake — better known as Area 51.

The family who owns the mine overlooking Area 51 has been at odds with the air force, which condemned the property last month, after the family declined a $5.2 million buyout.

“I have a geologist friend who I took out there, who’s just a buff, and he said it is literally almost priceless,” said Barbara Sheahan, Groom Mine heir. “There is so much there, not only the ore which is in the ground that can be mined, but in all the intrinsic value of what’s on the land.”

What’s on the land includes buildings, mining equipment and the remains of kin who worked the mine since the family acquired it in the 1870s.

There’s also the question of indignities suffered by the family from nearby government testing including buildings strafed by military planes and radiation drifting downwind from above ground nuclear shots in 50s and 60s.

“This has been like I said a 60-plus year nothing short of criminal activity on the part of the federal government, the AEC, Black Ops, CIA and you can go on and on,” said Joe Sheahan, Groom Mine heir.

On Sept. 16, federal Judge Miranda Du signed the order in the condemnation case giving possession of the Groom Mine property to the United States government. The Sheahan’s have asked for a jury trial, but the issues will be limited to how much the air force must pay for the land and the  disposition of the equipment and personal property left on the site.

“But there never has been either, so it’s nothing new. But we would like to change it at least to get our stuff out and be paid the value,” Barbara Sheahan said.

The air force made its final, $5 million offer to the Sheahan family after concluding that the security and safety of defense testing in that area made private land ownership impossible.

It the condemnation case, the air force values the land at only $1.5 million.

The Sheahan’s say it’s worth much more than that considering  the value of the minerals in the mine, the abuses the family has suffered over decades and the land’ s historical significance.

Already, the federal government controls too much of Nevada’s land. Now, it apparently wants the land owned by a family that predates any nearby military installation.