After President Obama illegally traded five high-ranking terrorists to regain one American deserter, people demanded to know why. One American Green Beret who worked behind the scenes shared information and now he’s drawn the fire of the Obama Administration[1] for having blown the whistle on this travesty. 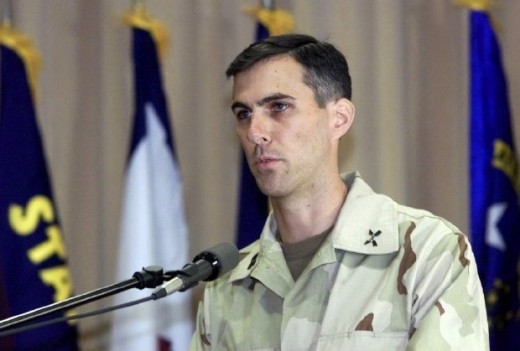 An Army war hero turned whistleblower told Congress Thursday that the military retaliated against him for talking to Congress about his plan to trade one Taliban warlord for at least six American and Canadian hostages, including Sgt. Bowe Bergdahl.

Ultimately, the State Department insisted on a deal to free the Taliban five for just Bergdahl, and rejected his plans to secure the release of more hostages.

Lt. Col. Jason Amerine testified Thursday before the Senate Homeland Security and Government Affairs Committee. Amerine is a Green Beret who the Army had treated as a war hero for his role in the 2001 invasion of Afghanistan, and who later helped the military promote recruitment through media appearances.

He told the panel he was well into a plan to try to win the release of at least six Americans and Canadians. Aside from Bergdahl, Amerine was hoping to free Caitlin Coleman, who vanished in Afghanistan while pregnant in the fall of 2012, and her Canadian husband Josh Boyle. Coleman had a baby while in captivity.

Another hostage was Collin Rutherford, a tourist captured by the Taliban in late October 2010, and there was another hostage that Amerine declined to name. Previous media reports identify that hostage as Warren Weinstein, a U.S. Agency for International Development worker held for years who President Obama recently announced was accidentally killed along with an Italian aid worker in a CIA drone strike in Pakistan in January.

Amerine said his office at the Pentagon “was working every initiative possible” to get the hostages home when “we saw that no one else” was trying to do so.

The Obama administration has faced a firestorm of criticism in its handling of U.S. hostage policies and communications with their family members. Amerine’s communications with Rep. Duncan Hunter’s office, R-Calif., and others on Capitol Hill, has led to media scrutiny of administration’s handling of prisoners held overseas and contributed to the White House’s decision to launch a review of those recovery efforts, according to Hunter’s office.

Amerine testified Thursday that he and other members of his Pentagon office lured a Taliban warlord to the U.S. under “a false promise of safe passage and basically unsealed an indictment and put him in jail for life.”

The office was hoping to leverage the warlord’s release for those six Americans and Canadians and had reached out to a Taliban tribe “that we believed could free the hostages.”

“We made a lot of progress on it,” he told the committee. “But in the end, when the Taliban came to the table, the State Department basically said it must be the 5 for 1 and that was the only viable option we have.”

Amerine decided to speak with Hunter about his plan. After speaking to Amerine, Hunter filed a complaint to the Pentagon’s inspector general alleging a questionable ransom the U.S. government possibly paid for Bergdahl’s release.

Amerine said complaints then surfaced that he was sharing sensitive information with Hunter.

Hunter and Amerine were quite open with their concerns, and at one point, the California Republican even set up a meeting between Amerine’s office and the FBI to discuss civilian hostage plans. After that meeting, Amerine said, the FBI responded by contacting Coleman’s father and threatening them not to speak to Hunter again or they would stop getting any FBI support to find their daughter.

“I mean just an atrocious treatment of family.” Amerine said. “So the FBI complained to the Army and for reasons to be seen there was a bit of debate within the Army on whether I actually did anything wrong … that led to an investigation.”

After the meeting with the FBI, Amerine says the Army suspended his security clearance, removed him from his job, launched a criminal investigation, canceled his retirement orders and is in the process of trying to court-martial him.

After the Army canceled his retirement orders, he says his pay stopped briefly as well. But Amerine argues that he was exercising his constitutional right to serve as a whistleblower.

Asked about the testimony Thursday afternoon, the White House declined to talk about specific hostage cases but defended its overall commitment to seeking the return of those held overseas.

“The president has talked extensively about the great lengths that the U.S. government has gone to try to secure the safe return of hostages overseas,” Earnest said, noting that Obama has authorized U.S. Special Forces operations in Syria and Yemen to try to rescue Americans held by terrorist networks.

Earnest also noted that the Obama administration is reviewing its hostage policies, which could help make the government “more effective in leveraging all of our assets to bring these hostages home.”

“I would anticipate we would have some more details soon,” he said.

While it is undeniable that government must be able to run with a certain amount of secrecy, the Obama Administration has taken this concept to a whole new level that, in comparison, makes Nixon look like an above-board president.

Our president swaps five high-ranking terrorists for one American deserter and those who are willing to discuss this travesty are not treated as heroes, but targeted. This is a travesty and contrary to not only what Obama promised as he ascended to the highest office, but contrary to our fundamental concepts of government and the people.