With the Obama Administration already claiming victory on the deal with Iran, many have been vocal about their concern that a nuclear Iran will make the world a more dangerous place. One conservative leader is suggesting that Obama’s foreign policy is leading us down a very dangerous path[1]. 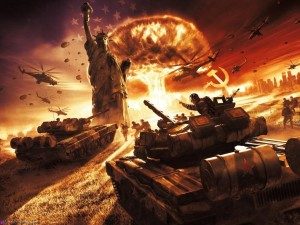 “This virtually guarantees, in my opinion, World War III, and I think that alone would qualify Barack Obama for being the worst president that the United States has ever had to endure,” she said in an interview with “NewsTalk Florida.”

“You can get economics wrong, and you can turn it around,” Bachmann added. “Where we have problems decades into the future are disasters with foreign policy.”

Obama restored diplomatic relations with Cuba in January and is now finalizing a nuclear deal with Iran.

The ex-congresswoman said those actions had strengthened terrorists. She said that, overall, Obama’s Middle East decisions were “pro-jihad” and “anti-Christian” blunders.

“This president, Barack Obama, has been almost just heartless and bloodless, when it comes to the persecution of Christians and Jews across the world,” Bachmann argued.

“He has been the best friend of the terrorist,” she charged. “I don’t mean that in a flip way, but his actions and rhetoric have been such that he has dated the rise of the goals of terrorists across the world.”

Bachmann said a nuclear-armed Iran was a graver threat than even the Islamic State in Iraq and Syria (ISIS) that the president did not understand.

“But the biggest problem of all is Iran, and that’s where we need to focus because Iran cannot get a nuclear weapon, and that’s why it’s imperative that this Congress wake up and hold this president accountable,” Bachmann urged.

Bachmann’s comments come with the Obama administration selling a framework for a nuclear deal with Iran to lawmakers. The deal has faced skepticism from Republican lawmakers who are weighing legislation that would empower Congress to review any final agreement.

Ayatollah Ali Khamenei, Iran’s supreme leader, insisted Thursday that any agreement must first lift economic sanctions on his country. Negotiators must hammer out the final accord by June 30.

Nothing makes me feel more comfortable that a country that openly chants “death to America,” not only getting a nuclear weapon, but then taking advantage of a supposed peace between the US and them.  Just ask Neville Chamberlain how peace with Nazi Germany worked out.